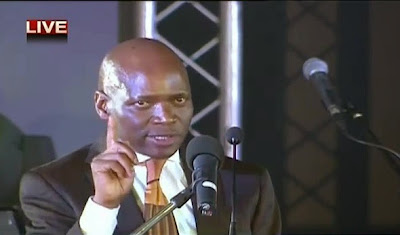 At a somewhat bizarre and completely off-point launch event of the SABC's rerun channel SABC Encore (DStv 156) held yesterday, the public broadcaster's controversial Hlaudi Motsoeneng once again took the podium to rant and rave, saying "MultiChoice must pay", that he's glad that the SABC is led by a blind person, that he's "coming for pay-TV", that the SABC is part of the government, and that people believe in him.

The SABC launched SABC Encore - a channel packaged with old, retro programming from the SABC's archives in Auckland Park - on MultiChoice's DStv satellite pay-TV platform at a somewhat strange event on Monday at the Greenside Theatre in Johannesburg where acts like Mango Groove performed on stage and hits like Brenda Fassie's Weekend Special blared over the speakers.

In attendance at the SABC Encore channel launch event, sitting at white tables draped in beads were, oddly, the minister of sport, Fikile Mbalula who later also spoke and made toasts; as well as the minister of communications, Faith Muthambi; and the public broadcaster's chief operating officer (COO) Hlaudi Motsoeneng sitting in-between them.

Actor Joe Mafela was the master of ceremonies and the SABC announced that no questions and answers would be allowed at the event which ran for over three hours "because there isn't time".

It didn't take long for the SABC's famously matricless and controversial COO to take the stage, once again raising eyebrows with some of his comments and saying people who are criticising the SABC and MultiChoice channels deal saying the SABC sold its archives to the pay-TV operator, is doing so out of a lack of knowledge.

Mired in a lengthy and costly court case around his High Court ordered suspension, Hlaudi Motsoeneng, instead of talking about SABC Encore, launched into a lengthy speech extolling the virtues of the SABC management.

Hlaudi Motsoeneng threatened pay-TV in South Africa that he's coming for them, praised the gutted SABC board, said he's not able to "cook" the books of the SABC, that it is time for MultiChoice to pay and that the SABC which is a public broadcaster is part of the government.

"We are also able to generate revenue from other partners. MultiChoice is one of them. People have been saying ‘SABC we are selling out national archives. You know, lack of knowledge is dangerous. Anyone who is saying that, it's lack of knowledge." 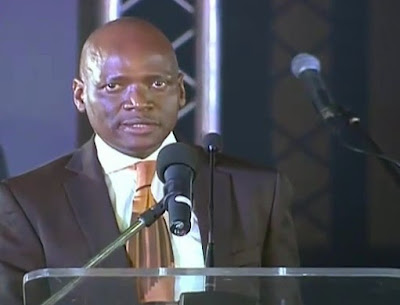 'Now is the time for you to pay'
Hlaudi Motsoeneng said "MultiChoice was not paying SABC even a cent. MultiChoice you have obligation. Your obligation is you need to contribute to the public broadcaster."

"You MultiChoice, our content is sitting there on your platform. SABC1, 2 and 3 – our channels are sitting there. And when you look at the research, the SABC is the most watched channels in those bouquets of MultiChoice."

"I said to MultiChoice, ‘Now is the time for you to pay. And fund the content of the SABC."

"Why people are after SABC? It’s because we are aware some of the people they want SABC to collapse. So they can go and buy one of the channels. It is not going to happen in our leadership," said an admonishing Hlaudi Motsoeneng who often during his speech waived the finger of his right hand in the ear just like an former apartheid-era South African president.

He was referring to the SABC not keeping to the strict stipulations to reduce its head count as it agreed to in the government guaranteed loan which National Treasury provided as an emergency bail-out in 2009 when the SABC hovered on the brink of financial collapse due to mismanagement. 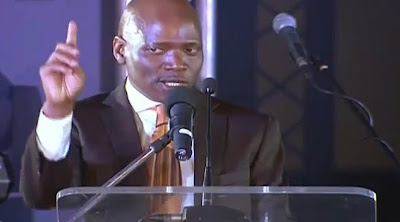 'Happy that we are led by a blind person'
At the SABC Encore launch Hlaudi Motsoeneng proclaimed that the SABC and others in government believe in him, and that the SABC board - constantly plagued by in-fighting, firings and instability - is good.

"We have a very good board under Prof. Obert Maguvhe. And I'm happy that for the first time we are led by a blind person," said Hlaudi Motsoeneng. "That shows that this country is moving forward. This professors and doctor they believe in Hlaudi. Make no mistake. One for sure."

Talking about old SABC local content being recycled on SABC Encore, Hlaudi Motsoeneng said "some of those actors they are going to benefit. We are going to pay them royalties [residuals]."

Hlaudi Motsoeneng said the SABC - which is a public broadcaster, funded by SABC licence payers and the treasury - is part of government and that private companies need to step up and fund the SABC.

"MultiChoice I need more money. You need to invest more. Government is calling private sector to partner with government. As part of SOE's [state-owned enterprises], we are part of government," said Hlaudi Motsoeneng. 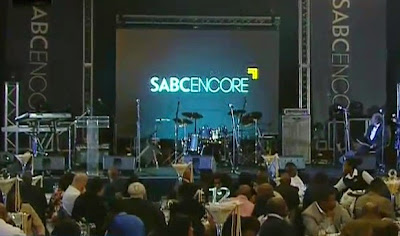 Pay-TV operators: 'We are coming for you'
Hlaudi Motsoeneng said he is coming for pay-TV operators - presumably On Digital Media (ODM) and StarTimes Media SA's StarSat, and Sabido and Platco Digital's OpenView HD (OVHD) which is actually a free-to-air satellite service after customers buy a once-off set-top box (STB) and dish - who are getting the SABC's TV channels without paying for it.

Addressing the ongoing controversy and case before the Competition Commission's tribunal over the SABC supplying MultiChoice with SABC News (DStv 404) and SABC Encore - an application brought by Caxton, Media Monitoring Africa (MMA) and the Support Public Broadcasting Coalition - Nolo Letele said "this question of MultiChoice now owns the SABC channels - there's no such thing". 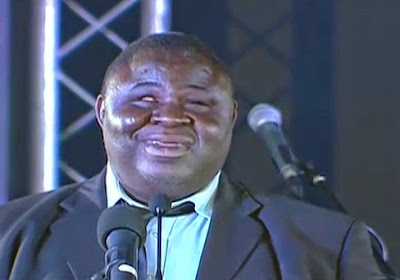 SABC chairperson Prof. Obert Maguvhe also took the stage at the launch of SABC Encore and said the partnership between the SABC and MultiChoice should actually be a marriage.

"Our [SABC] archives are intact. MultiChoice thank you for this wonderful partnership."

"Actually, for me, I wouldn't have preferred it to just be a partnership. Actually it should be a marriage. You can be our bride and we will be the bridegroom. We love you so much MultiChoice. We want to enter into a marriage."

Minister of communications, Faith Muthambi also spoke, congratulated the SABC on launching SABC Encore and said: "The SABC used to have a world class animation and language dubbing facilities in television. I humbly request the SABC to look at reviving this capacity."

Faith Muthambi said the SABC competes for audience. "The SABC should be innovative for it to remain relevant to its audience".
on 12:13:00 PM