Phakamile Hlubi on the eNCA does a Glenda Kemp; pats a python around her neck as part of a missing snake story. 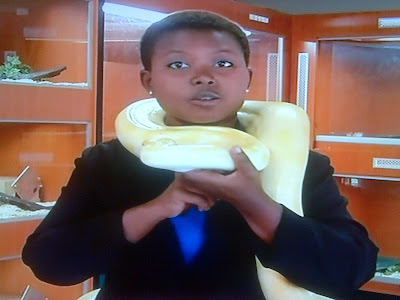 Phakamile Hlubi on the eNCA (DStv 403) has done a Glenda Kemp for her sensational reporting on the "runaway" black mamba at the Pretoria zoo - getting in on the act by draping a yellow Burmese Python around her body.

Gimmicky reporting - from running in a red speedo to riding an elephant is nothing new for the eNCA and its coterie of correspondents - but has it become too much?

While one of the world's most deadliest snakes has escaped its enclosure at the Pretoria Zoo, the eNCA's Phakamile Hlubi thought it well to lovingly stroke a snake around her neck to enhance her on-air reporting.

The danger of course is that the reporter risks becoming the story instead of reporting on it.

TV news reporters just like print journalists do have to immerse themselves in the stories, environments, events and the lives of those they cover, but they shouldn't become a part of it.

Testing or evaluating a service or product or experience - such as a story on advanced driving technique classes just before a holiday period as Iman Rapetti and Jeremy Maggs did at the end of 2012, or test-driving a solar-powered experimental vehicle is full-on real and proper reporting.

In such cases the reporter is qualitatively involved to be "the Johnny" - the guinea pig or model to relay experiential coverage to the viewer.

On the other hand draping a snake around your neck tot pop your story makes you part of the act - you become part of the circus sideshow instead of objectively telling about it.

Remember that this isn't Thabang Thabong mid-morning educational show-and-tell kindergarden television, a place where something like this ("let's learn about the zoo; let's learn about snakes") would be fine - it's (supposedly) a news story which has now been cheapened by begging for "ooh watch me" legitimacy.

That's why Phakamile stroking a python is lazy, opportunistic (and slightly exploitative) reporting by the eNCA.
on 12:07:00 PM