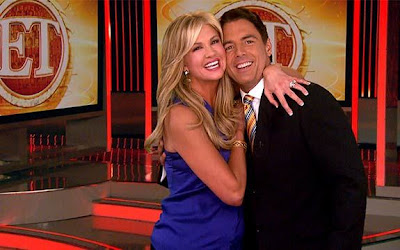 After word came in March that Mark Steines will be leaving Entertainment Tonight he finally bid farewell on Friday after 17 years and did his last show as co-anchor of "the world's most watched entertainment news magazine show".

It now leaves Nancy O'Dell as the sole anchor of Entertainment Tonight (seen in South Africa on SABC3) who herself took over from Mary Hart in 2011. Unlike Mary Hart there wasn't a special episode dedicated to Mark Steines, just an insert looking back at moments and interviews over the years, and then an in-studio goodbye by Nancy O'Dell.

Nancy O'Dell told Mark Steines that he had done 2 516 shows for Entertainment Tonight. "I have a lifetime of memories to go with all of them," Mark Steines said.
on 10:14:00 PM