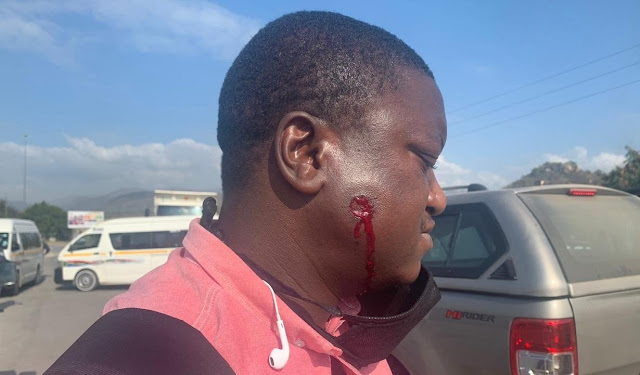 The South African police shot the former SABC reporter with a rubber bullet in his face.

Mweli Masilela wrote on social media that he "just got shot while covering the taxi shutdown in KaNyamazane in Mpumalanga. Police fired rubber bullets just a few minutes after arriving in the area to disperse taxi drivers who were blocking the road leading to the township".

Newzroom Afrika told TVwithThinus in response to a media enquiry that Mweli Masilela was caught in the line of police fire while reporting news.

"Our immediate concern is always the safety of our team so we were distressed to see that our reporter Mweli Masilela had been caught in the line of fire while carrying out his duties. He is at home now and recovering after a visit to the hospital. We wish him a speedy recovery," says Zamahlasela Gabela, Newzroom Afrika's head of marketing and communications.

The South African National Editors' Forum (SANEF) in a statement says it "condemns the shooting of Newzroom Afrika reporter, Mweli Masilela while covering a protest by taxi operators in Kanyamazane township outside Mbombela, Mpumalanga."

"Mweli Masilela was shot and injured when police fired rubber bullets just a few minutes after arriving in the area to disperse the protesters. There was a standoff between the police and taxi operators from the early hours of the morning over the taxi operators' demand to carry passenger loads of a hundred percent."


"I had just finished doing interviews with some taxi drivers who were protesting blocking the main road leading into the Kanyamazane township. I was taking some visuals of the blockade when police arrived on site and started firing rubber bullets," Mweli Masilela told SANEF.

"I was clearly visible carrying a video camera and tripod, that's why I still don't understand why they still had to shoot me. They didn't even give a warning for people to retreat. They just shouted move, move, and fired shots - that's when one rubber bullet hit me," Mweli Masilela told SANEF from the hospital where he was examined. He has opened a case against the police.

"SANEF believes that this violent incident could have been avoided had police considered the safety of everyone involved before firing. The police should have given reporters and protesters sufficient warning time. Also, they should have given journalists time to find a safe space before indiscriminately firing in their direction."

"SANEF calls on police leadership to take swift action and investigate the matter to identify and discipline those that compromised everyone’s safety. Further, we believe that public officials should respect the role of the media in our democracy. We intend to raise the matter with the National Police Commissioner in our upcoming meeting," SANEF says.

A year ago in July 2019 Mweli Masilela was also assaulted - that time by a group of men in Vosman where he was reporting about the death of a 16-year old boy who died after he was trapped underground in a mine.