The Muppets and preschool edutainment strand Takalani Sesame returns for its 11th season to SABC2 from 1 June on weekdays.

The Muppets and the preschool edutainment Takalani Sesame children's programming block is returning for its 11th season from Monday 1 June on SABC2 at 15:30 on weekdays with some new friends.

The Muppets will welcome some new friends to the neighbourhood for new adventures as they explore the world around them through play, while learning the importance of not giving up when working through a problem.

The 11th season of Takalani Sesame will introduce the 6-year-old Basma and her best friend Jad, the self-declared "cute, furry little monster" Grover, and the clucking, bawking, squawking Chicken.

They will be joined by familiar Takalani Sesame Muppet friends Elmo, the 3-and-a-half year-old red monster with a contagious giggle.

Elmo tries to keep up with the older characters, Zuzu, an imaginative and curious natural leader, Kami, a five-year-old who loves to read and sing, Moshe, the gentle giant who loves to dance and take care of his garden, and Zikwe, who always has a story to tell from his world travels.

Elmo and Zuzu start every episode in their Clubhouse where a child calls in to invite them for a visit to someplace special around South Africa like a skatepark or the Nelson Mandela Children’s Hospital.

They decide to use everyday objects to make a gift to bring along, like a drum or maracas and their Takalani Sesame friends drop in at different points to help them build their special item and solve problems along the way.

Each episode ends by going on a fun ride to deliver the item to their new friend, and together they sing along to the Takalani Sesame ubuntu song and showcase some dance moves. 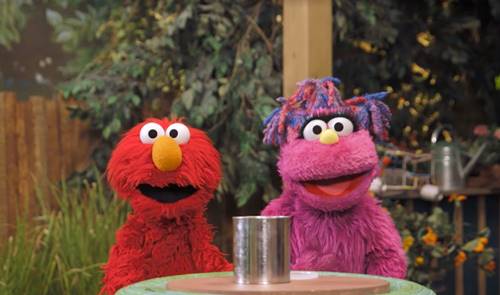 "The new season blends the playfulness and humour that Takalani Sesame has always been known for with the fundamental lessons that children need to thrive, including cognitive, creative problem solving and socio-emotional skills, while nurturing the foundational values of ubuntu."

"At a time when many children are out of school Takalani Sesame will bring the power of  learning through play to children and caregivers across South Africa."
on 5:23:00 PM