#SONA2020: South African TV coverage of the State of the Nation 2020 Address today. 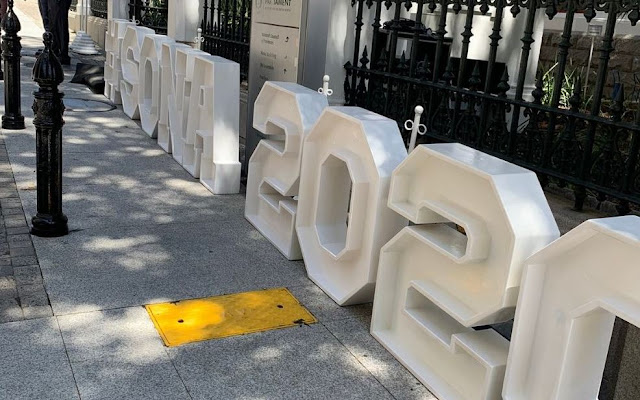 Several TV channels will be doing live coverage and analyses today of the State of the Nation Address 2020 of South African president Cyril Ramaphosa.

The State of the Nation Address is divided into three different parts - the ceremony where the Civil Guard of Honour welcomes the president and his guests as they walk along the red carpet at parliament; then the state ceremonial which includes a 21-gun salute and the South African Air Force flypast, and lastly the official address from the president.


SABC News
The SABC will broadcast the State of the Nation Address 2020 (#SONA2020) live on TV, radio, its online SABC News channel on YouTube and on its website on Thursday, 13 February.

The SABC will do preview coverage and analyses on various programmes on SABC News (DStv 404) leading up to the address. These shows will cover the Civil Guard of Honour, red carpet arrivals coverage and the 21 Gun Salute.

The SABC says that SABC News reporters and anchors will be on location at parliament and in the Auckland Park studio in Johannesburg to cover the event.

SABC News roving reporters will also be spread across South Africa bring citizens' expectations and reactions in various communities in the run-up to the speech and afterwards.

The SABC will have leading political and economic analysts in studio and on-location helping the audience to make sense of the president's speech.

The red carpet arrivals will be live streamed from 16:00 on the SABC News channel on YouTube until the end of the proceedings as members of the judiciary, cabinet ministers and members of parliament (MPs), including the speakers of the various provincial legislatures, premiers and diplomats arrive at the Company Gardens entrance in Government Avenue to the Old Assembly.

Following the president's address, a post-analysis of the speech will be broadcast live with experts and reaction from various political parties.


SABC2
On SABC2 coverage of the State of the Nation Address 2020 speech will start at 18:00 and continue until 21:00, preempting the channel's normal schedule. On Thursday there won't be an edition of the Afrikaans TV news on SABC2. It will be followed by the day's episode of Muvhango at 21:00.


eNCA (DStv 403)
eNCA didn't respond to media enquiries about its SONA coverage and presentation plans but the channel will be doing rolling live coverage of the State of the Nation Address 2020 kicking off from 16:00.

In past years eNCA had a pop-up studio in Cape Town's parliamentary precinct and will likely have one again this year.


Newzroom Africa (DStv 405)
Newzroom Afrika says the channel has planned special broadcast coverage of today's event with a senior team of anchors and reporters in both Cape Town and its studio in Linden, Johannesburg.

"Our full day of coverage means live crossings from early in the morning until late into the evening with much analysis and reaction."

"Our seasoned anchor, Cathy Mohlahlana together with our politics editor, Sbu Ngalwa will be hosting our special broadcast from Cape Town - while Stephen Grootes makes his Newzroom Afrika debut from our Linden studios."

Newzroom Afrika says its reporters Ziyanda Ngcobo, Athi Mtongana and Nasiphi Same will be covering the SONA2020 red carpet, the parliamentary precinct and surrounds while Pelane Phakgadi and Malungelo Booi will do the wrap-up coverage, getting reaction and analyses.

From 21:30 there is a half-hour Wrap-up: SONA 2020 carrying reaction from various politicians, after which a repeat of the speech is broadcast at 22:00 tonight.

The same coverage will be streamed on parliament's YouTube channel.
on 7:44:00 AM