TV REVIEW. 2020's most jarring, jaw-dropping and crowded new reality show on VIA is selfish ... and must-watch insane. 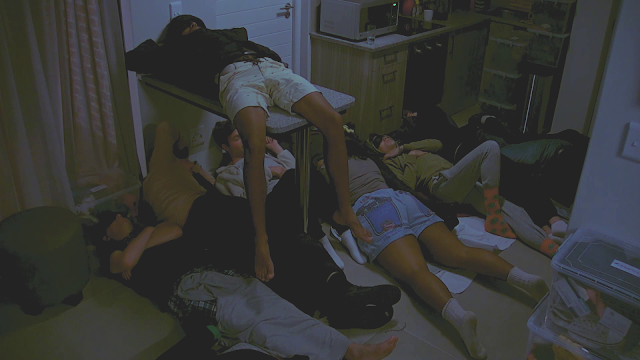 The craziest, most crowded, brand-new reality format show of 2020 has started on South African television with Trap! Dis My Huis! on VIA (DStv 147) at 20:30 on Wednesdays, pushing 50 strangers into a small house Big Brother style to see who copes best without food and toilet paper for the chance to win R1 million.

In reviewing the first episode of Trap! Dis My Huis!, an Afrikaans version of the international reality format Get The F*ck Out Of My House, it's immediately clear why only Cher and cockroaches will survive an apocalypse.

That selfishness will be the end of humanity is on full display in the Afrokaans produced show, as 50 contestants who've never met all storm the small home at the same time, each armed with one transparent, plastic crate with their personal belongings to find some space inside the tiny two-person dwelling for the chance to win R1 million in cash.

With only food for two people, one toilet and bathroom, the 50 people from across South Africa storm the house and immediately selfishly start to scavenge and steal everything from the toilet paper and sugar to the small piece of cheese; some even drinking the milk straight out the bottle and someone feeding on the yoghurt while as a fake courtesy walking around spoon-in-mouth asking everyone "Do you want some yoghurt?"

Filled with several low emotional intelligence (EQ) contestants, the brash, rash and loud contestants in the intensely crowded space so quickly becomes too much that by the end of the first episode there's already someone who bailed voluntarily and couldn't take it anymore, in addition to those contestants getting eliminated.

The camera-filled little house that includes roving cameramen moving among the contestants capture clever details with South Africa's latest Big Brother done in a small space that is utterly fascinating and television and gives a compelling look at how ordinary South Africans behave when they're stuck in too close quarters with one another and no way out.

The usual rambunctious exuberance and initial friendliness when reality show contestants enter a show quickly make way for fighting, accusations and open animosity, extremely selfish behaviour, some irritated contestants stirring the pot who start to scheme and play a political game, and what reality TV does best: tears.

While watching Trap! Dis My Huis! is hypnotic and true must-see television, the weakest part is the curtseying co-presenter duo of Amalia Uys and Zoe Brown, with the former 7de Laan actress and former breakfast show presenter who both seem to "over-present" with just that bit of extra and too much fake enthusiasm.

Especially Amalia comes across as trying too hard to try and relate on camera to individual contestants yet also seems slightly guardedly distant. Both use too much hand gestures and are too "kindergarden teacher" like in conveying the simple instructions and rules as well as telling viewers what happened during challenges.

It's not necessary for the presenters to really do much; the bunch of contestants make for arrestingly interesting television from the moment they set foot inside the house with those stepping over the red line who are disqualified immediately.

One quickly ends up shown on the loo without the most important paper. People who dislike each other somehow find a way - and a direction - to divert direct eye contact, as the extroverts take over and overpower the introverts "Lord of the Flies" style.

A woman remarks that she wishes a man took the lead and was the leader while a gaggle of couch potatoes become the gossip queens who quietly observe, bitch and moan.

Some steal sugar and honey and from Kuilsriver to Potchefstroom and Fresnaye the contestants who are cussing start to suss each other out as they jockey for position while showing a range of human behaviour from extreme selfishness to cooperative teamwork - this is humanity caught and shown in its suburban natural habitat.

Couch potato psychologists, sociologists and observers of human behaviour will get huge enjoyment out of watching the deftly done reality show.

Clever camerawork and editing smartly shows that even in the most crowded of close quarters humans still find spaces and places to hide their emotions.

Even though they modify their external behaviour, cameras still capture unguarded feelings, looks and actions with delicious dramatic irony that other housemates, often crouched or standing right beside them, are not always aware of.

Besides voting for a house captain which is a popularity contest (and who ends up making house rules), the housemates also get weekly challenges which could earn them money to buy either the food or supplies like toilet paper that they need.

One hidden door reveals a bedroom and additional bathroom for the house captain (powerful leverage since the person can invite other people in to share the space), as well as a pantry with hugely expensive food and supply prices.

The show is utterly fascinating and if the meltdowns, tears and bickering continue through the rest of the first season, Trap! Dis My Huis! which is already more than worth the watch, will be hypnotic viewing.