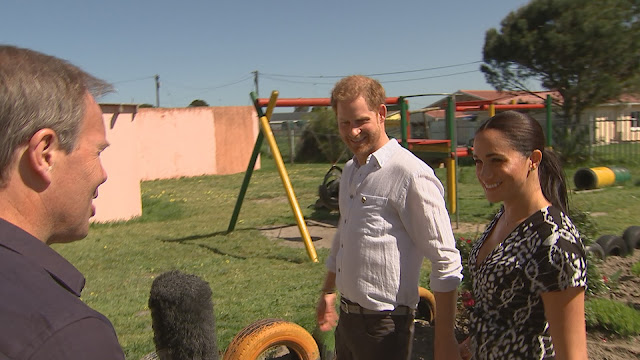 The rush-documentary for ITV about Prince Harry and Meghan Markle’s South African and Southern African visit in late-September will now be broadcast on BBC Lifestyle (DStv 174).

Harry & Meghan: An African Journey will be broadcast on BBC Lifestyle on Thursday 24 October at 20:00 on the BBC Lifestyle channel on MultiChoice's DStv satellite pay-TV service for South Africa after BBC Studios snapped up the quick-done documentary.

Harry & Meghan: An African Journey was produced by ITN Productions and sold by Passion Distribution.

When Harry and Meghan recently took their baby son Archie on their recent Royal tour of Southern Africa, the ITV News anchor Tom Bradby accompanied them as an inbedded journalist.

Tom Bradby who has made two other films with Harry in Africa, got exclusive access to couple and speaks to them about the causes and issues they care most about and explores some of the pressures and challenges they face living as a young family in the glare of the world’s media.

Harry & Meghan: An African Journey provides a vivid insight into how they see their roles as modern Royals on the international stage and how they balance their public duties with their private family life.

"This is the third documentary I’ve made with Prince Harry in Africa. I expected it to be an interesting  journey but this ended up being a fascinating insight taking in their passion for their work, their private happiness and the challenge and pressure of balancing their public duties and family life," says Tom Bradby.

"We are thrilled to distribute this extraordinary film. What begins as an observational film about Harry and Meghan in Africa evolves into an insightful, remarkably candid testimony from the Sussexes on the immense stresses and strains which both young royals have experienced,” says Emmanuelle Namiech, Passion Distribution CEO.

Ian Russell, the head of international programmes, says “Harry & Meghan: An African Journey demonstrates what makes ITN unique amongst the world’s leading producers. The documentary was made in an incredibly short turnaround with our ITV News and ITN Productions divisions working seamlessly together."

"Plus ITN’s in-house technical capability enabled us to deliver instantaneously to a global audience of hundreds of millions”.
on 2:24:00 PM