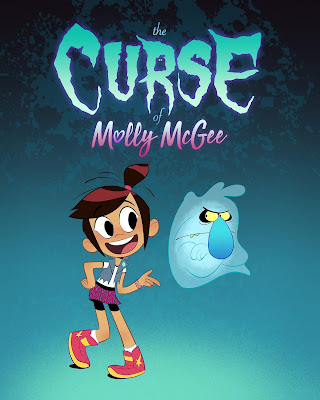 Disney describes The Curse of Molly McGee as a buddy comedy about tween optimist Molly McGee and grumpy ghost Scratch.

It's executive produced by Bill Motz and Bob Roth, alongside Steve Loter.

The series will follow Molly, who lives to make the world a better place, and Scratch, whose joy comes from spreading misery. When one of Scratch's spells backfires, he finds himself forever cursed in Molly's presence.

"Our studio is bustling as we continue to bolster our development slate of projects across multiple platforms. We are delighted to embark on this journey with Bill, Bob and Steve with The Curse of Molly McGee, one of many projects we are excited to see come to life for kids and families to enjoy," says Meredith Roberts, senior vice president for animation strategy, at Disney Channels.

"Along with the numerous projects in development from this group of incredibly talented creators, we are poised to lead Disney's TV animation legacy of inspired storytelling and beloved characters into the future."
on 10:41:00 AM