TV CRITIC's NOTEBOOK. Talk the Thrones remains the best aftershow for Game of Thrones and is back with weekly episodes for the 8th season; while Showmax weirdly missed the chance to create its own South African video podcast about it. 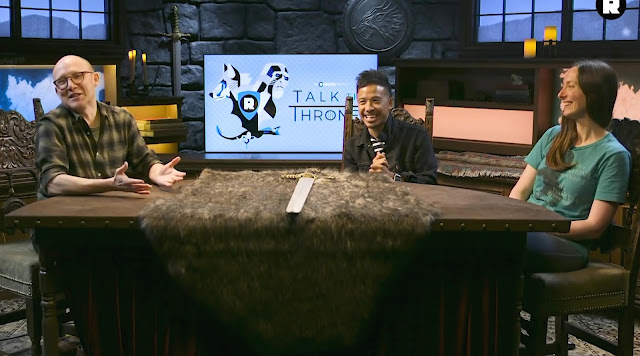 Talk the Thrones remains the best aftershow for HBO's Game of Thrones seen on M-Net (DStv 101) and Showmax, with the American video podcast that is back to comment on every episode of the 8th and final season of the fantasy drama series.

At the same time it's very odd to note how Showmax as a video streaming service, and with months and months to plan, did absolutely nothing to create and make a weekly South African aftershow video podcast about Game of Thrones available that it could easily have done.

Coming in cheaper than its cheaply-produced and embarrassing Runnin' with Skhumba, a South African Game of Thrones aftershow can easily have high production values and add a lot of content value to a service like Showmax with three or so informed experts around a desk talking about their favourite fantasy show and filming them.

Now Talk the Thrones is back, now on The Ringer, with weekly episodes released right after Game of Thrones episodes in which the panel of experts once again discuss, analyse, dissect and speculate about what they've seen in the latest episode.

The must-watch Talk the Thrones is the renamed After the Thrones aftershow that M-Net brilliantly grabbed and added in 2016 for Game of Thrones' 6th season in 2016 as a companion show that it would broadcast on its then M-Net Edge channel after episodes of Game of Thrones.

Andy Greenwald and Chris Ryan discussed and analysed every Game of Thrones episode and while M-Net dropped it for the 7th season when it moved to Twitter and was renamed Talk the Thrones, it remained additional must-watch television for fans of the fantasy book and TV series.

Personally, I've watched it and have seen every single episode since its aftershow covering the 6th season and now Talk the Thrones is back on The Ringer and can be watched on Twitter or YouTube weekly since this past Monday.

Chris Ryan is back, this time with Mallory Rubin and Jason Concepcion who were guest panellists in previous seasons. If you like Game of Thrones, you will very likely enjoy the very deep and highly-informed Talk the Thrones discussion.

The odd thing however is that MultiChoice's subscription video-on-demand (SVOD) service Showmax that is looking for content and new local content, and is also carrying the 8th season of Game of Thrones, did absolutely nothing to try and secure something like Talk the Thrones - or to create or carry it's own local South African version.

Making episodes available at the same time as M-Net (DStv 101) on Mondays at 22:00, Showmax has come across as seemingly somewhat desperate and over-zealous in efforts to also try and cash in on the big Game of Thrones craze in the run-up to the new 8th season.

Yet, where it matters beyond mere marketing and where something like a cool little local aftershow could have made a real brand differentiation for Showmax, Showmax did ... nothing.

It would have been absolutely great for viewers and fans of Game of Thrones - and for Showmax - to set it apart further from M-Net if it could have said something like: "After watching Games on M-Net on Mondays at 22:00 - or why not just watch it on Showmax from the beginning - stay without switching and watch The Games Show on Showmax where we discuss everything you want to talk about and simply need to know after the latest episode of Game of Thrones".

Or what about getting Talk of Thrones? Although not local content, just like it was on M-Net Edge, it would have been a perfect video streaming add-on addition for Showmax, and perfectly suited for what a video streaming service is and should be.

The aftershow keeps a viewer already watching Game of Thrones engaged and watching even longer, just like what M-Net did.

If you know television, you would know that genre and fantasy show fans who simply can't get enough of this stuff and this specific show, would definitely tune in to an explainer aftershow about Game of Thrones.

Showmax could have easily gotten some really informed and obsessed South African fans, experts and TV critics together around a table with a mic and a video camerar for a unique aftershow for which zero licensing intricacies are required.

Just like what SuperSport does with after-match analysis and experts weighing-in with a separate show that is related, yet unrelated to the visual content of the actual match, aftershow series and video podcasts discussing drama series from The Walking Dead and Star Trek: Discovery to The Orville and whatnot allow fans and viewers to get even more insights, commentary and analysis of what they're already watching and really like to hear and see and find out more of.

What happens now is that really committed viewers who want even more content and analysis around Game of Thrones leave M-Net and Showmax as platforms and then go elsewhere to YouTube and Twitter to find great aftershows like Talk the Thrones, where if Showmax offered something more, some very likely would have stayed put for longer.

So there already actually exist South African produced Game of Thrones aftershow podcasts. Who knew? Well, Showmax knew, and not only that, but has engaged with some of them and sent them stuff.


WOW 🥰 Thank YOU so so much The Grand Maesters Of @ShowmaxOnline for this thoughtful gift!
It will certainly comfort me, you’ve made me feel super normal about my #GameOfThrones obsession! Appreciated 😭🧡 #GoT #JoinTheNightsWatch #WinterIsComing #WinterIsHere #LeloOfHouseBoyana pic.twitter.com/EwUoMj8vqd
— Miss Lelo (@MsLeloB) April 18, 2019


Showmax literally took the time and effort and spend money to make and send to some of the media covering Game of Thrones in South Africa, personalised things like this - including to The Night's Watch - that it actually knew about.

Why didn't Showmax rather partner up and invest properly a bit of money to bring something like The Night's Watch as add-on, local content to its platform and to make it a thing? It would have been great if something like this was actually on Showmax from when the 8th season of Game of Thrones began.