ANC politician Jessie Duarte lashes out at eNCA reporter Samkele Maseko in an ugly rant at a press briefing after telling SABC News to switch their camera off. 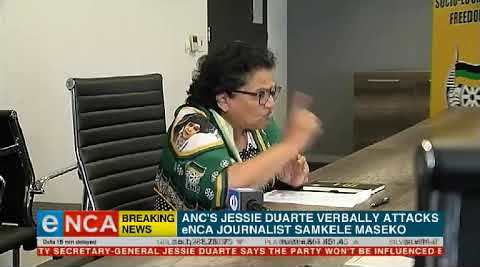 Jessie Duarte, the ANC political party's deputy secretary-general in South Africa, on Tuesday afternoon lashed out in an ugly rant at the eNCA (DStv 403) reporter Samkele Maseko with the shocking verbal tirade that immediately went viral and lead to massive coverage on eNCA as well as SABC News (DStv 404) and across other media in the country.

The SABC's SABC News division, broadcasting the shocking incident from its own camera angle, revealed how Jessie Duarte told the SABC to turn its camera off before she launched into her attack on eNCA and Samkele Maseko.

The SABC not only kept its camera rolling but also broadcast how Jessie Duarte told the SABC to switch its camera off on Tuesday evening.

At the ANC press briefing Jessie Duarte laid into Samkele Maseko, slamming him as "the worst bully I've ever come across", saying he was "arrogantly disposed" and that he believes he is "the lord of media".

Jessie Duarte in her tirade criticised Samkele Maseko for trying to "defend freedom of speech you've never fought for".

"You call me me a bully but you are the worst bully I've ever come across. I've never met anyone as arrogantly disposed as you are and you want to defend freedom of speech you've never fought for."

"And you don't defend freedom of speech because your particular TV station has decided the direction it will go on as it did in 2016 you followed the DA slogan of 'vote for change'."

"So what do you want us to do? To bow and scrape every time you walk into a room and call you my lord, the lord of the media? You are just a journalist just as I am just a citizen, nothing more, nothing less. Yes, this is personal," said Jessie Duarte.

In a statement issued by the ANC afterwards the political party said that it "has noted the one-sided and biased story given by the eNCA on the interaction between Samkelo Maseko" and Jessie Duarte and that "Samkele Maseko engaged in an unacceptable and unprofessional outburst".

The ANC said that "Jessie Duarte reiterates her commitment to freedom of the media and editorial independence which has been championed by the ANC for many years".

Anton Harber told eNCA that "I'm very concerned because Jessie Duarte is so far out of line that, she really needs to be pulled back into place. She seems to think that she can dictate who asks what questions and fails to recognise the role of the media and her duty".

"She seemed to be upset about the hard questions. And we're saying, well, journalists must ask hard questions. That's the whole point, Kate Skinner, executive director at the South African National Editors' Forum (Sanef) told SABC News in an interview on Tuesday evening.

Morning Live anchor Leanne Manas told viewers that the ANC political party's spokesperson and Jessie Duarte have both gone underground. "Please answer your phones. We want to talk to you."
on 11:07:00 AM