Netflix just made its first interactive, choose-your-own-adventure TV episode available for adult viewers - a feature-length episode of the science fiction series Black Mirror, entitled Black Mirror: Bandersnatch - that has 5 different endings and multiple different choices, storylines and scenes depending on the viewer's decisions during the course of the film.

Even the same scene that might appear in more than one version of a story will be different, filmed differently and from a different angle as the perspective changes depending on small and big choices throughout the story, as well as characters who are included or who are not present, depending on what had already happened.

Black Mirror: Bandersnatch is virtually torrent and illegal download proof since its in-built decisions makes it non-linear as viewers have to watch and interact with the horror drama on Netflix and shape the narrative, with every decision changing the unfolding story.

It's the global video streamer's first live-action TV episode for adults after interactive shows like Puss in Book: Trapped in an Epic Tale and Minecraft: Story Mode.

Bandersnatch, coming before the 5th season of Black Mirror in 2019, further fuels the phenomenon of binge-watching, with viewers who might want to re-watch and re-choose various different options to see a different version of the story unfold, as they try to literally guess their way to the "perfect" ending. 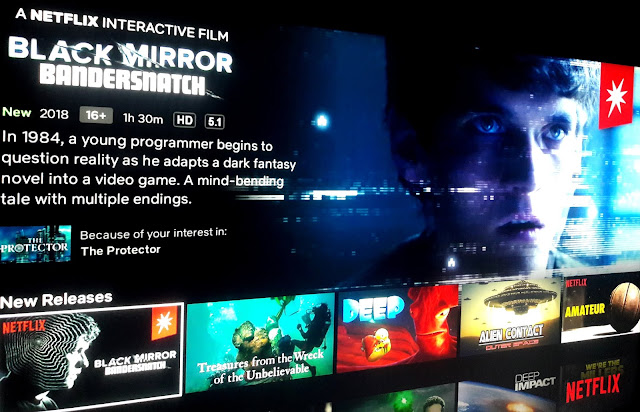 Bandersnatch follows a young British programmer named Stefan (Fionn Whitehead) in 1984 in the United Kingdom, trying to create and to create his own best version of a computer game that is based on a choose-your-own-adventure novel, entitled "Bandersnatch" that was written by a controversial author who went crazy and murdered and beheaded his wife.

"In 1984, a young programmer begins to question reality as he adapts a sprawling fantasy novel into a video game and soon faces a mind-mangling challenge," the official Netflix description reads.

However, since Black Mirror is a science fiction anthology series, is on Netflix, and is an interactive episode/film dealing with decisions about someone trying to create a choose-your-own-adventure game, Bandersnatch is incredibly "meta media" (including about Netflix), extremely self-referential, and contains numerous Easter eggs, complete with difficult and "secret" cut scenes just like in video games.

What makes Bandersnatch interesting - and incredibly complex - is that individual, "once-off" decisions don't just affect the scene and scenes playing immediately after, but in fact network and link together collectively throughout the entire story to create many multiple variations of the narrative.

Is your psychologist a secret ninja?
Bandersnatch can go from 90 minutes to over 2.5 hours depending on a viewer's choices, and the aim is to "help" Stefan or to get to a "happy" ending where he's produced the best-possible game - a 5-star rating when it's reviewed by a British TV show.

The best review however doesn't mean that Stefan or the other characters necessarily remain alive for this to happen.

There are however no real "good" or "bad" choices, and if you "redo" the story after you get to your first ending, Bandersnatch will restart but start to create shortcuts skipping over things the creators know you've already seen, and give short summary scenes of what you would already have seen, bringing you to new choices.

How about shaking things up and turning the psychologist into a ninja with a fantasy physical fight scene for instance? Or telling Stefan you're watching him from the "future" through Netflix or giving him other clues?

There can exist no real linear broadcast version of Bandersnatch since it was made to be an interactive experience with and for the viewer.

Besides multiple Easter eggs, Bandersnatch also contains a so-called "golden egg" - an almost impossible to get or virtually impossible scene for viewers to get or reach. The trick? Choose "Pick up Family Photo" - and do so twice - if/after a viewer manages to get and chose for the character of Colin Ritman to visit Stefan in a dream.

To make things even weirder there is also a so-called "Netflix ending" - one where Stefan is told and realises he is being controlled by a "21st century streaming service", a director yells out and a confused Stefan is told he's actually an actor named Mike, with Stefan's dad who rants about Netflix being in control, and the camera pulling out to reveal the setting as being just a movie set.

To make things even more weirdly wonderful, Bandersnatch's post end-credits scene actually leads to a website, www.tuckersoft.net/ealing20541, where viewers can download and play Colin's Nohzdyve computer game seen earlier in the story - a game that is itself another Easter egg to the Black Mirror's "Nosedive" episode.
on 9:41:00 PM