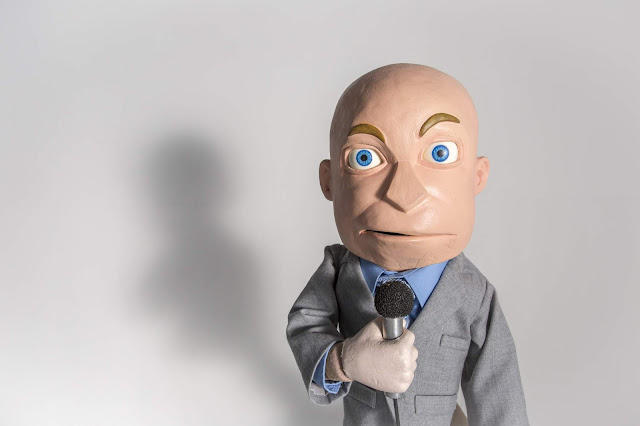 eNCA (DStv 403) is adding a puppet show, Almost News with Chester Missing, on Sunday evenings at 19:30 from 25 November as the South African TV news channel ramps up its plans for 2019's election coverage.

Almost News with Chester Missing is a spin-off show from Late Nite News with Loyiso Gola, where the puppet made his first on-air appearance, and is produced by the same production company, Diprente, that did LNN for eNCA until its abrupt cancellation in September 2015.

Chester Missing, created and done by comedian Conrad Koch, has remained upfront in viewers' visage the past three years, with appearances from time to time on eNCA.

Although mercilessly mocked and struggling to get a word in edgewise, South African politicians appear to have a fearful yet awed fascination with the puppet, with politicians from across the political spectrum as well as a variety of public office holders and business high-flyers who have been willing to sit for the satirical, farcical and frenetic interviews with Chester Missing for what they in return crave most: time on television and in the limelight.

eNCA says Almost News with Chester Missing will "take an irreverent look at the current affairs landscape and put high-profile politicians through their paces in interviews only the country's most famous puppet can get away with".

Chester Missing chipped in with a quotable saying "I have my own TV show. I'm a puppet. Have any of you realised how crazy this is? Someone tell Hlaudi. He broke ground for puppets everywhere," referring to the fired former controversial SABC chief operating officer (COO) Hlaudi Motsoeneng who has been a blight on the South African TV industry.

Conrad Koch says "Chester and I are hugely excited to be creating this show with South Africa's best news source, eNCA, and the amazing award-winning team at Diprente".

"South Africa has huge room for incisive, hilarious satire as we move towards elections next year. We want to make Almost News with Chester Missing both well researched and really, really funny."

Mapi Mhlangu, eNCA editor-in-chief says "Over many years Chester has become an integral part of the political firmament and has asked questions of our leaders no one else would dare to".

"And with one or two exceptions, politicians and business leaders love the interchange and are happy to participate. Chester also provides a release valve for South Africans who need to laugh at each other and themselves."
on 1:25:00 PM