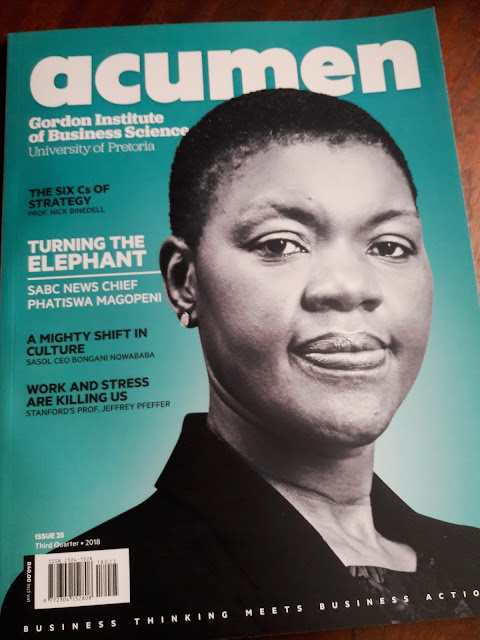 The new SABC news boss, Phathiswa Magopeni (48) is on the latest cover of Acumen, the business magazine of the Gordon Institute of Business Science at the University of Pretoria, talking about "turning the SABC elephant", and revealing how SABC staffers openly mocked her when she arrived.

Phathiswa Magopeni is currently hard at work trying to improve the SABC and SABC News' reputation and the credibility of the public broadcaster's newsroom operations, while she is working on her PhD at the Gordon Institute of Business Science (GIBS).

In the fascinating 4-page article cover story, Phathiswa Magopeni (complete with an error in the spelling of her name on the Acumen cover) who returned to the SABC in March this year, reveals how she had been mocked inside SABC corridors when she returned.

An SABC staffer for instance told her in her face that "several people have tried and failed and it's men who have tried".

About revamping SABC News she says "In crowded spaces like ours there are tough choices to be made, such as exercising disciplined focus and remaining absolutely clear about who you are, and what you are about and what you cannot be as a news outlet."

"We are going to tell this story in its light and shade."

Phathiswa Magopeni who visited the SABC's 30 offices in all 9 provinces says she will have to make tough decisions on who moves forward with her among the SABC's 950 news staff that includes 300 freelancers.

"We need to allow constructive dissent within the newsroom and no editor is going to say 'shut up'. Because if you don't listen I have no reason to believe you are going to bring the multiplicity of voices in our news content," she says.

"If you don't listen to the forces that make you uncomfortable here, I have no reason to believe that you are going to bring in different voices from outside."
on 2:04:00 PM