BREAKING. Struggling SABC plans to fire up to 981 full-time staffers - or a third of its workforce - in massive restructuring and brutal retrenchment plan, in addition to 1 200 or half of its 2 400 freelance workers also getting the boot. 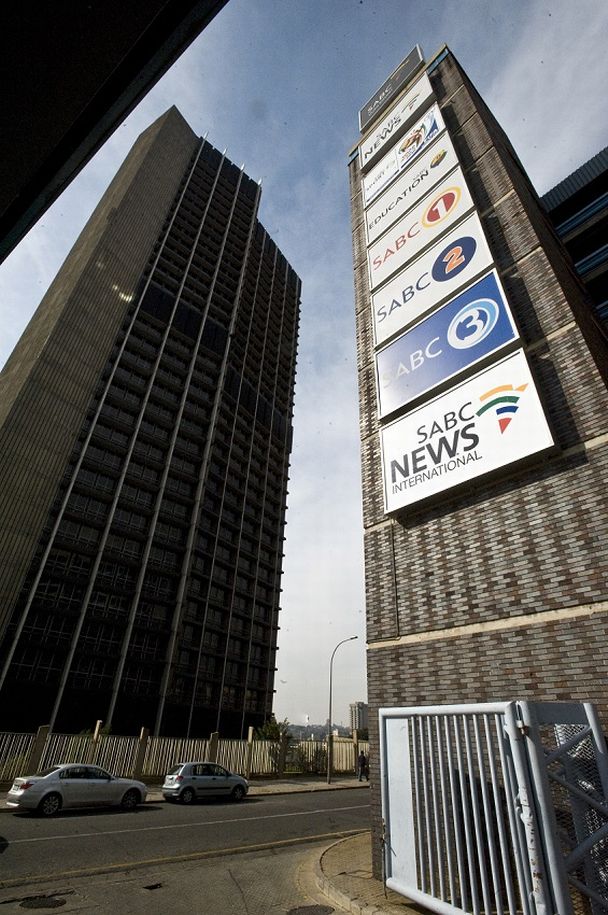 A terrible Christmas and 2019 await SABC staffers as the struggling South African Broadcasting Corporation, fighting for survival, plans to fire up to 981 of its 3 376 full-time staffers or a whopping third (29.05%) of its total workforce in a brutal retrenchment plan - in addition to 1 200 or essentially half of its 2 400 freelance workers who are getting the boot by not having their contracts renewed.

With the massive restructuring at the SABC, the broadcaster's CEO Madoda Mxakwe, on Monday in an internal memo told staffers as part of a "section 189" notification in line with the Labour Relations Act, that "drastic measures must be taken" or otherwise "the organisation would simply not be financially viable going forward".

After mismanagement and corruption, as well as wasteful and irregular expenditure of billions of rands, the beleaguered SABC is mired in debt, unable to pay suppliers and producers on time, and unable to secure the content it requires, with South Africa's auditor-general Kimi Makwetu who in September described the broadcaster as commercially insolvent.

A staggering amount of the SABC's expenditure goes to just paying staffers, although just 60% are directly involved in programming. The SABC is supposed to spend the bulk of its money on creating and broadcasting content.

One of the SABC's biggest expenses is its salary bill. Although a R7.2 billion revenue generating company, it's saddled with a massive annual salary bill of R3.1 billion.

The planned restructuring of positions and retrenchments will cut R440 million per year from the SABC's ballooning salary bill and doesn't include the money the broadcaster plans to save from cutting its freelance budget in half. 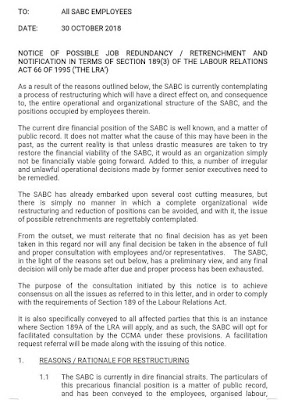 The SABC in the memo that TVwithThinus has seen, told staffers the broadcaster is "currently in dire financial straits", blaming "erstwhile management of the SABC" and saying "there has been many instances of unlawful and irregular promotions and increases afforded to employees, resulting in an inflated remuneration cost" and that "the SABC is also overstaffed".

The SABC told workers it is abolishing positions that will "result in the redundancy of a large number of positions, and the restructuring of others" that will cut R440 million from the SABC's wage bill.

Besides the 981 full-time workers the SABC could retrench, "the SABC has further resolved to end the contracts it has with approximately 1 200 freelance employees" the broadcaster told staffers. It currently has 2 400 independent contractors, meaning 50% are effectively getting fired.

The SABC told workers that this is still not enough and that "despite these efforts, all that remains is unfortunately the current staffing and positions in the SABC, as the final avenue of cost reduction open to the SABC".

The SABC says all employees at all levels within the broadcaster will be affected, including SABC Television and SABC Radio, SABC Sport, SABC News, provincial operations, group services, the commercial enterprise division, media technology and infrastructure.

The SABC told staffers that it plans to have the consultation process over retrenchments "finalised by 31 January 2019" so that "termination of employment can be given with effect from 1 February 2019".

The SABC proposes to pay fired workers one week's salary per completed year of service.

"We fully appreciate that employees may be concerned and apprehensive about the possible consequences which the contemplated redundancy will have upon employees and we are committed to conclude the process as soon as reasonably possible," SABC staffers were told on Monday.


All employees at all level affected
In a statement to TVwithThinus the SABC confirmed the staff memo and said it today "issued a notice to all staff informing them of the SABC's intention to proceed with section 189 of the Labour Relations Act".


4 Years Later: Finally to court to enact Public Protector recommendations
Four years after South Africa's Public Protector released her report into rot and corruption at the SABC, entitled "When Governance and Ethics Fail" the SABC is finally taking action, saying it is going to the country's Labour Court with an application "to have irregular appointments and promotions declared invalid as first identified in the 2014 Public Protector's report".

The SABC says there are still people working at the SABC currently "who were irregularly appointed, promoted or had their salaries irregularly increased".

Madoda Mxakwe in a statement said the public broadcaster "will correct all these irregular appointments, promotions and salary increases".

"The SABC will also approach the Labour Court, in terms of the Basic Conditions of Employment Act, in its quest to recover monies that were irregularly paid as salary increases during the period under review."
on 10:43:00 PM