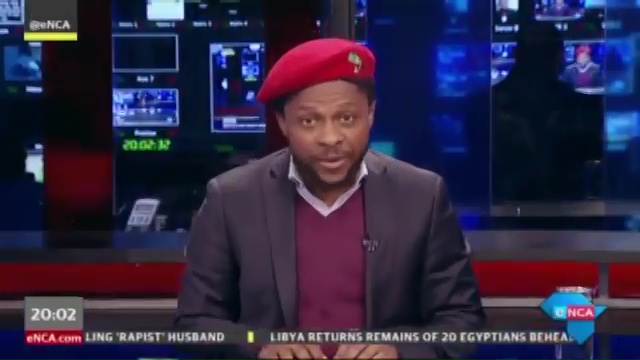 There's no astrologer or a wheel of fortune game show element just yet, but eNCA (DStv 403) that has just added South African politicians as anchors and has literally given its anchor chair over to those it's supposed to cover, has become the real-life epitome of what the prophetic 1976's film Network warned about in terms of making TV news an info-entertainment spectacle.

The eMedia Investments channel run on MultiChoice's DStv satellite pay-TV platform and that will turn 10 years old next month is also the most watched TV news channel in South Africa.

Because eNCA doesn't have to care about actual competition and viewers getting turned off by things like its latest bake-and-fake prime time plan, it has come up with its latest infotainment on-air extravaganza: literally bumping eNCA's own anchors out of their chairs since Monday night to turn it over to politicians during its most valuable 20:00 prime time hour.

Of course there's favour and favouritism when eNCA chooses unskilled, inexperienced politicians with no background, knowledge, qualification or hours of experience to suddenly be TV news anchors over and above people whose work it really is and who've worked to achieve what is supposed to be a respected position.

Of course there's something wrong when you cosy up, have a hearty laugh and engage in partnering up with TV fun-and-games with politicians instead of actually covering them.

And of course its terrible when you're eNCA and instead of representing the viewer and asking the hard questions of politicians, turn your most valuable asset over to them to ask softball questions, banter with joy and make on-air niceties.

While the scrappy SABC's SABC News is too busy fighting and confronting a daily existential crisis with dwindling resources to do such a thing, the propagandistic and amateur ANN7 (now renamed Afro Worldview) doesn't have and never had the skill sets, or knowledgeable enough executives to do such a thing.

But eNCA is like the Russian doper and disgraced Lance Armstrong - willfully and deliberately, literally "gaming" the system - shooting up with damaging injectibles for a high, abandoning ethics, and doing what it isn't supposed to do not because it must or can, but because it wants to. 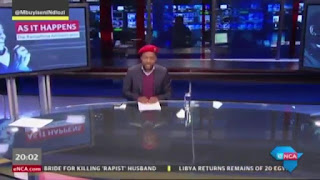 eNCA's trash-up of its news values and destruction of the perceived value that a TV news anchor chair holds, even comes with its own #AsItHappens hashtag on social media.

It signals that for eNCA, it is about prime entertainment at 20:00 more than what it is about giving South Africans news, context and perspective when most of its viewers are tuned to the channel.

eNCA is playing with fire, and what's worse is that Mapi Mhlangu, eNCA managing director and editor-in-chief, as well as every single eNCA reporter and TV anchor know it and are all ailently going along with it.

Think of what eNCA is doing! eNCA is literally turning over its most valuable real-estate - TV time - to politicians, to make them shine, to get uncritical coverage, to sit in the anchor chair, for free reign, for huge free publicity and what is called (earned) media exposure (although it's not really earned). Who does that and how on earth can eNCA do this?

What exactly are viewers supposed to think who happen to turn on the TV and to eNCA and who then see a politician, from whatever party, centre-frame, positioned where eNCA places the "news-bringer"?

What exactly are viewers supposed to think of eNCA, selling itself as objective, impartial and supposedly holding politicians to account on behalf of the viewing public, when it welcomes the politicians with feted access to its anchor chair?

The way that eNCA deliberately bastardise news values because it knows and assumes that its African news audience doesn't know better or won't know better is embarrassing and disgusting.

Will CNN International or the BBC's BBC World News or even America's lame-duck commercial news shows like NBC Nightly News ever turn their on-air product over to politicians like this? Never. But it's apparently okay for eNCA to do so.

It's tragic and tragically comical that eNCA anchors have to do clips giving "advice" to politicians on how to anchor, how to ask questions and what to ask - as if it's all a game and not to be taken seriously, while they literally are shilling for people replacing them in their own seats, as if they're "rooting" for, and encouraging friends.

This is how propaganda TV news channels in Egypt and across the Middle East and southeast Asia look in dictatorial regimes where it's not really about bringing the real news to viewers but about how the news looks.

eNCA isn't supposed to be in this game. 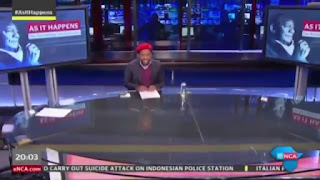 While eNCA is courting politicians, it raised questions about why eMedia Investments is being jolly-jolly with specific politicians and giving them the spotlight to shine.

Is it to influence them to give preferential treatment to eNCA just like eNCA is giving to them?

Is it to get political parties like the EFF that have been critical of eNCA to back off and be "nicer" to eNCA because eNCA is ingratiating itself with certain politicians to be less harsh in a lovely, sycophantic tit-for-tat?

What message is eNCA sending to not just viewers but to people who want to be(come) serious journalists, reporters and news anchors? That the shortcut to get on eNCA is to rather become a politician?

The stark truth is that it is bad for eNCA, and bad for viewers, when eNCA wants to be friends with politicians (or celebrities, or company executives, or people in positions of power).

The job at eNCA and eNews is not to make nice or to make them look nice - the job is to actually report the news.

eNCA is supposed to ask the hard questions of politicians and the government about things like lack of service delivery and promises made to the people.

Instead eNCA is subverting its mandate of holding people and politicians to account by letting them sit behind the anchor desk under best lighting and basking in the soft glow, literally opening the door for the wolf to the TV hen house to come and play.

In Network, the news anchor Howard Beale lamented the trashing up of TV news. "Listen to me: Television is not the truth! Television is a God-damned amusement park! Television is a circus, a carnival, a traveling troupe of acrobats, storytellers, dancers, singers, jugglers, side-show freaks, lion tamers, and football players. We're in the boredom-killing business!"

You'd be forgiven for thinking that eNCA doesn't know about Network or its dire warnings.

The sad truth is that eNCA not only knows, but knows exactly the trash-TV it's doing. But all for the rush of that high, hey?
on 2:17:00 PM