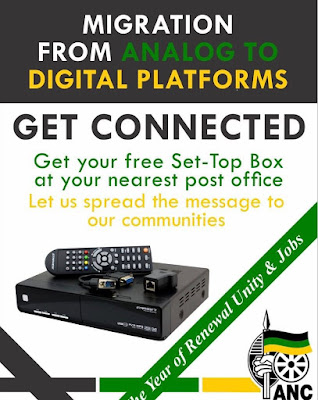 The DA's member of parliament, Marian Shinn and the party's shadow minister of telecommunications and postal services, on Sunday in a statement said the pamphlets "is a blatant abuse of taxpayers' money and must be stopped".

She also revealed that the department of communications' latest new deadline of June 2019, apparently instituted by the International Telecommunications Union (ITU) after South Africa missed all of the other previous deadlines including the 17 June 2015 deadline, is apparently bogus.

"The minister of communications now claims that a new deadline of mid-2019 has been agreed to with the International Telecommunications Union (ITU), a date that coincides with South Africa's next general election".

"Correspondence I have had with the ITU office in Geneva, shows that there is no 2019 deadline for South Africa," said Marian Shinn.

"A parliamentary question I submitted to the minister asking documentary proof of the 'new' deadline has not been answered," said Marian Shinn.

Marian Shinn says she has written to communications minister, Nomvula Mokonyane, the cabinet leader of the Broadcasting DigitalMigration (BDM) project of which the DTT set-top boxes are a component - and responsible for its marketing "to put an immediate stop to the flyers' distribution and have them destroyed".

"I have also written to the ANC National Executive Committee member, Dr Siyabonga Cwele, minister of telecommunications and postal services, who is responsible for the government entities procuring and distributing the decoders to demand an investigation within the ANC to determine who instigated the abuse of a government-funded project under his watch for election purposes and to hold these people to account."

STBs are currently being given out to poor South African households who have to prove that they're earning less than R3200 per month.

The much-delayed digital migration project aims to bring all broadcasting in South Africa from analogue to digital, freeing up spectrum bands to be used by mobile broadband products and services.

Various misguided political decisions, as suspicions over MultiChoice's alleged undue influence on the government's policy regarding conditional access (encryption) of the government-sponsored decoders, as well as drawn-out in-fighting and court battles between MultiChoice and e.tv, as well as other broadcasters and manufacturers, have delayed South Africa's DTT process for a decade.
on 6:27:00 PM