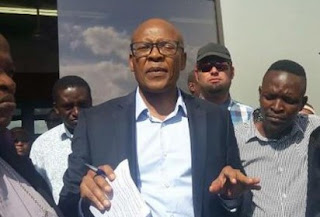 Despite a name change, public protests keep happening at the Midrand headquarters of what was ANN7 and is now called Afro Worldview (DStv 405) since Monday, the beleaguered former "Guptanews" channel embroiled in scandal with MultiChoice and that's now belonging to Mzwanele Manyi.

The first public protest at the Midrand premises now branded Afro Worldview happened on Thursday when protesters voiced their anger at Mzwanele Manyi for yanking off the air the short-lived and cancelled show, Incredible Happenings, of Paseka Motsoeneng, known as Prophet Mboro.

Incredible Happenings was supposed to start in March on ANN7 but failed with Paseka Motsoeneng slamming ANN7 and the channel for allegedly still being involved with the notorious and controversial Gupta family.

Then Mzwanele Manyi said it is "committed to continue working on the project".

A month later it's over and nothing came of it, with followers of the Incredible Happenings Ministries who are furious over the cancellation of the religion show before it even started on ANN7, now Afro Worldview, who failed to communicate anything about the show's cancellation to the press.

On Thursday the protesters, many of the from Cosas (the Congress of South African Students) handed a memorandum of demand to Mzawanele Manyi.

"As an organisation, we had our slot in the show that was going to be a reflection of the good work the prophet has done for both our organisation and our schools," Cosas Gauteng said in a statement.

"We tried to make the show work but it was impossible for it to continue because if we had continued with it, it would have meant that MultiChoice must remove us from the platform with immediate effect".

Mzwanele Manyi has been given a 7-day ultimatum to go and address the Incredible Happenings community on why ANN7 and now Afro Worldview failed them.

They also demand a refund for money that was allegedly paid for the no-show programme to air that didn't.
on 11:52:00 AM