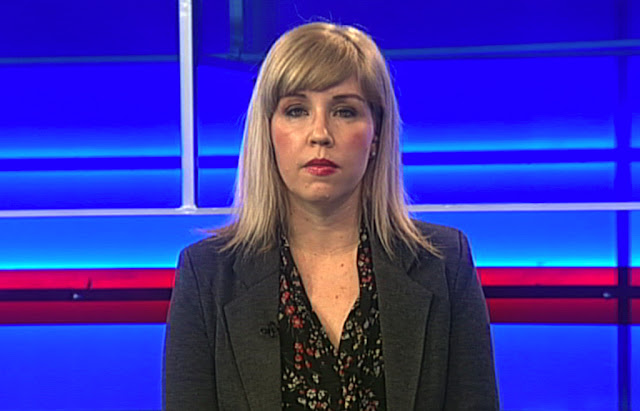 Karyn Maughan's exit from eNCA comes as a big blow to the channel, once again losing an extremely experienced reporter exiting its Hyde Park studio doors from where she gave viewers an unvarnished ringside seat to the country's court, crime and corruption dramas playing out in the news.

Sources revealed to me that eNCA's court coverer has had enough and is leaving the channel soon. No word yet from the few newserati who knew - and who are in shock - as to the precise reasons why.

Also not yet known: where exactly Karen Maughan is jumping to next.

TVwithThinus asked e.tv and eNCA who confirms that Karyn Maughan is leaving the news channel and says in a statement eNCA is sad to see her go.

"eNCA is sad to lose Karyn Maughan as a full time staff member," says eNCA in a statement in response to a media enquiry.

"Karyn has been a dedicated, astute and professional journalist covering some of the biggest news stories for eNCA over the past 8 years, including the Oscar Pistorius trial. However we are pleased to say that our relationship with Karyn will continue, with her appearing on-air in various capacities".

Karyn Maughan joined eNCA in 2010 and established herself as tenacious member of the elite front guard of South Africa's "must follow" reporters who are willing to take on and decimate the trash pack of feeble publicists, moron ministers and blocking spokespeople who stand in the way of the public getting answers.

Karyn Maughan's indefatigable courtside coverage bringing viewers all the lurid details both inside and outside of the Oscar Pistorius court trial cemented her place as a household name as far South Africa's small crop of famous TV news reporters go.

Since then the take-no-prisoners TV dragon slayer found, and successfully slayed, a new crop of trash TV characters who dared to sidestep and try and evade her piercing questions, for instance the department of social development's belligerent and clueless publicist Lumka Oliphant.

Karyn Maughan hasn't been scared to sit as close as possible to the front at press briefings - often seen taking her seat in the front row to clobber whoever is designated to face the press, with her piercing questions.

Besides reporting, Karyn Maughan has also appeared more on eNCA on weekdays as well as weekends from early morning to prime time as a commentator the last 2 years, roped in to weigh in and to unpack and give more insight on high profile court and crime cases as well as government corruption stories.
on 10:05:00 AM