New British miniseries, Guerilla, with Freida Pinto and Babou Ceesay and set during London's Black Power movement in the 1970's, starting on 1Magic on 31 January. 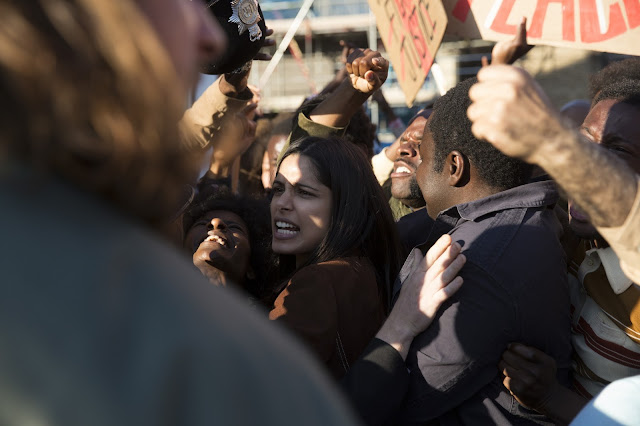 The new British miniseries, Guerilla, will start on 1 Magic (Dstv 103) on Wednesday 31 January at 21:30, telling the story of two young artists involved in London's Black Power movement in the 1970's.

Guerilla is a 6-episode drama series co-produced by Sky's Sky Atlantic channel and Showtime and was broadcast in April 2017.

Created by John Ridley, the Oscar-winning writer of 12 Years a Slave, Guerrilla is set against the evocative backdrop of 1970's London and follows two young activists involved in London's Black Power movement, whose relationship falls under intense pressure when they clash with racist elements within the police.

Sky says "Guerilla is a fictional exploration of a thought-provoking moment in history, which asks what might have happened if Black Power groups in the United Kingdom had turned to violence in their fight for equal rights".

In the first episode of Guerilla, Marcus and Jas go to a rally protesting the 1971 Immigration Act, with their friends Fallon and Julian. Jas encourages her former lover Kent Fue (Idris Elba) to come along – but he has a different plan for overcoming oppression.

During the rally, a tragedy spurs Marcus and Jas to liberate a political prisoner – Dhari Bishop - in order to form a radical underground cell.

John Ridley says Guerilla "is a story that is both timely and timeless. We started working on it long before the recent referendums and elections that took place in the United Kingdom and America".

"But I do think it says something when you can take a story that is set 40 years ago and it’s very easy for other people to draw conclusions from it about race, about immigration now. Clearly those are issues that have not only not gone away, but that have become more potent and more politicised in
the present".
on 8:43:00 PM