Glut of TV to watch continues as the number of Peak TV era original series keeps rising to a new record high in 2017. 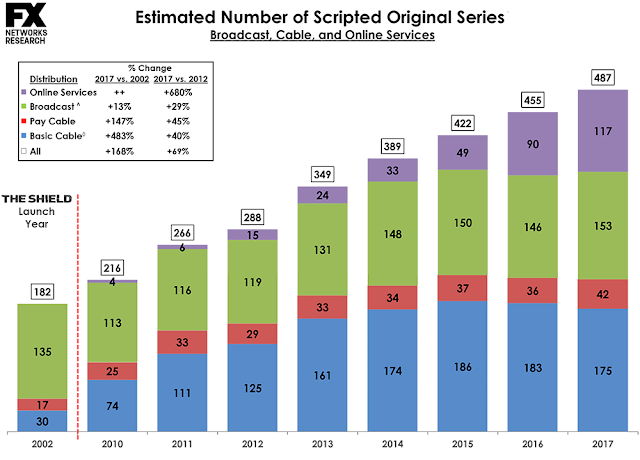 The glut of TV available to watch continues to as the number of Peak TV era original series keeps rising, reaching a new record high in 2017.

John Landgraf, FX CEO, has given his annual update on Peak TV to America's TV critics during the twice yearly Television Critics Association (TCA) tour in Pasadena, California, revealing that the amount of original TV series currently in production once again rose to a new record high in 2017 - up another 7% to 487 series from 455 in 2016, with no sign of slowing down.

A large percentage of this content is funneled to international viewers - including in South Africa and across Africa - through international pay-TV channels carried on platforms like MultiChoice's DStv satellite pay-TV platform.

Shows also travel as part of individual and Hollywood TV studio output deals with pay-TV broadcasters like M-Net buying large rafts of premium shows with which to programme and populate the schedules of its set of M-Net packaged channels that are carried on DStv.

Besides the American shows, South African viewers also have to contend with local broadcasters like the SABC, e.tv and community TV channels and their offering of shows, as well as international pay-TV channels ramping up the production of local shows filmed in South Africa and across Africa that are rapidly increasing year after year.

Then there's the sprinkling of European and Australian series, on top of the British series from BBC Worldwide for its channels set made available in South Africa and across parts of Africa.

The increase in original scripted American TV series during 2017 was largely fueled by the millions of dollars being poured into TV show creation by the massive global subscription video-on-demand (SVOD) services like Netflix and Amazon Prime Video - up from 90 to a whopping 117 series in 2017.

This continued growth in digital streaming programming is set to continue to drive the growth in the overall number of TV series from America in 2018.
on 1:02:00 PM