Friend Gayle King reveals Oprah Winfrey was told to cut her stirring Golden Globes speech and went over time: 'She knew exactly what she wanted to say'. 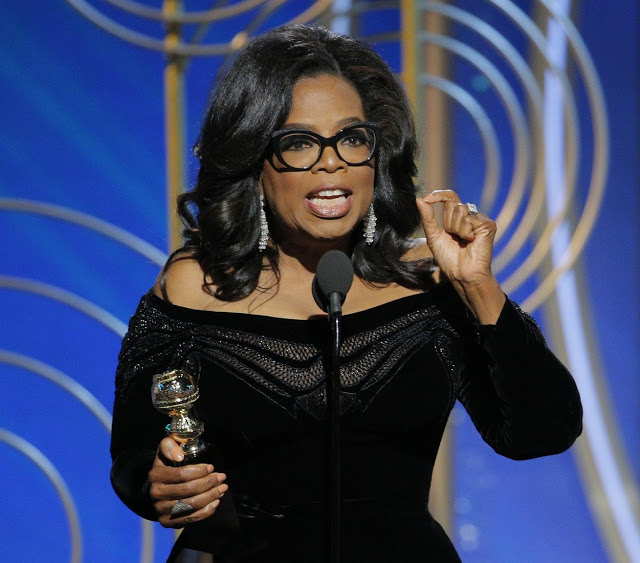 Oprah Winfrey's longtime friend Gayle King revealed that Winfrey went long over time in her electrifying acceptance speech at the 75th Golden Globes but that the award show's producers didn't dare cut her.

Oprah Winfrey's stirring speech as she accepted the Cecil B. DeMille award, led to a worldwide avalanche of calls for her to make a run for American president in 2020, although Gayle King, a presenter on the American channel CBS's morning show CBS This Morning, said Oprah is “not going to be running for president,” although she is now “intrigued” by the idea.

“I absolutely don’t think that her position has changed,” Gayle King said and added that Oprah didn't write and do the speech because she wanted to come across as being presidential.

"She crafted the speech, she talked to an editor at the [O] magazine, and the two of them came up with it, but Oprah put down exactly what she wanted to say. Those were all her words," said Gayle King.

"People said she wrote that speech as a launching pad for what she wants to do. That's absolutely not true," said Gayle King.

"She worked on it, she rehearsed it, she practised it - I was a practise audience member. And I have to say I knew the speech was going to be powerful just when she was reading it to time."

"Before [the time] when she was there at rehearsal, they told her she had to cut 3 minutes out of it because it was 6 minutes long. They said 'You have to cut it to 3 minutes'."

"And Oprah said if it was any other night than this one, I could do that, but I don't plan on cutting it".

"As it turned out - with all the applause - it went 9 minutes. And I think the producers thought that was worth going late for," said Gayle King.