Filming starts on new Afrikaans kykNET comedy, Mense, Mense, set for broadcast from April - but why add yet another lazy, reduplication show title? 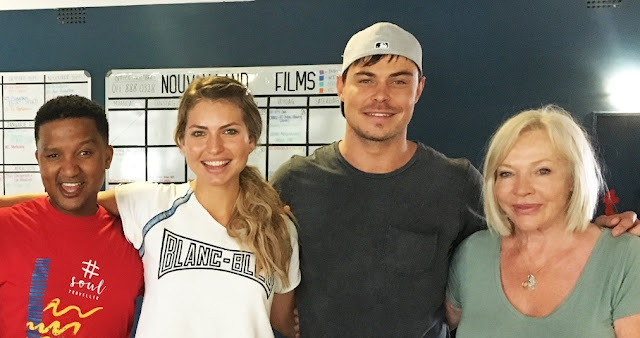 Filming has started on a new Afrikaans comedy for kykNET (DStv 144), lazily-badly entitled Mense, Mense, and set for broadcast on M-Net's Afrikaans pay-TV channel from Monday 9 April at 20:30.

The comedy produced by Nouvanaand Films and set in Johannesburg, revolves around a group of friends who are sharing their professional and personal lives as they live, work and interact together within the same building.

The Mense, Mense "cast cast" includes the singer Bobby van Jaarsveld and actors Crystal-Donna Roberts, Solomon Cupido, as well as Sandra Prinsloo as the building's landlord; in addition to Lea Vivier as well as Reynardt Slabbert.

kykNET says "Mense, Mense exposes the see-saw journey of friendship, relationships and adulthood, but above all the unbreakable love between strangers who become family".

Pierre van Pletzen is the director.

With Mense, Mense it is interesting that kykNET continues not to appear willing to put in the work and time to develop apt, original Afrikaans show titles, and struggles to use the rich, existing Afrikaans lexicon to find words to not just properly define programmes, but to indicate to viewers what they are about.

The repetitive and generic Mense, Mense joins the kykNET schedule that already has, and suffers from, reduplication like Parlement, Parlement that doesn't tell viewers not familiar with shows what they are.

There's also a problematic and lazy "Op Die" ["On the"] title trend on kykNET with show titles called Oppi Kassie [On the Box] and Oppie Stoep [On the Stoep], and even Op Die Spel.

Ideally no TV channel should ever have, or allow, even two show titles that are remotely close to each other in name.

American TV channel executives told The Hollywood Reporter back in 2012 about the topic of picking and assigning TV show names, that "You've got to have something that makes people say, 'I want to check that out'. It has to be catchy, and it has to frame for the audience the context of the show".

An Australian showrunner in 2010 about the same subject, told The Sydney Morning Herald that "unless you're expressing yourself properly with the title, you're most unlikely to succeed".

If kykNET orders some Steri-Stumpies for whoever all are responsible, and make them brainstorm for half an hour, surely better titles idea can be dreamt up than Mense, Mense.
on 4:54:00 PM