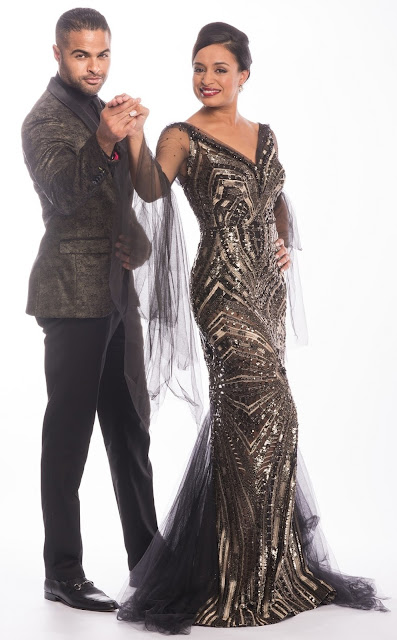 Lionel Ritchie might have been dancing on the ceiling but when the celebrity contestants of Dancing with the Stars South Africa waltz across the floor to strut their stuff on M-Net from next month, TVwithThinus can exclusively reveal that they'll do so on a roof.

The newly constructed ballroom dome on top of Hyde Park Corner at the corner of Jan Smuts Avenue and William Nicol Drive in the wealthy Johannesburg suburb is both literally and figuratively very far removed from the Carlton Centre Ballroom in downtown Johannesburg where Strictly Come Dancing SA started more than a decade ago on SABC2 in February 2006.

After 8 seasons on SABC2 and SABC3 that ended in 2015, M-Net and Rapid Blue decided to revive the BBC Worldwide format show and in the process also decided to shed the old name, taking on the American moniker of Dancing with the Stars to usher in a new TV era for the glitter floor format show on South African television.

A centrepiece as part of that pasodoble TV makeover is the brand-new rooftop ballroom, as the show moves from free-to-air to a pay-TV broadcaster and also into a social media milieu where viewers will now weigh in instantaneously as on-the-couch dance critics.

"M-Net and Rapid Blue kept an open mind while scouting all over South Africa for a suitable venue," explains Kee-Leen Irvine, Rapid Blue owner and the South African uber producer who will be executive producing the show from the Dancing with the Stars SA Dome.

"Having seen the Sanlam Handmade Contemporary Fair on the Hyde Park Corner rooftop, we had a conversation with Jill Grogor, who handles all the publicity and events for Hyde Park Corner about whether we couldn’t erect a dome at the top of the centre."

"Hyde Park Corner Centre Management loved the idea," says Kee-Leen, "but safety and logistics was a huge consideration for us. After extensive engineering investigation and assessment, we established that we could go ahead.


Unique ballroom seating 350 in horse-shoe configuration
Being done from a ballroom under a dome will be an African first for Dancing with the Stars that besides the Carlton Centre Ballroom in the past, is hosted in a variety of different venues all over the world - from full sound stage studios, like those at Elstree in London, to massive warehouses.

The new Dancing with the Stars SA will be using about 2 500 square metres of floor space for the production. With the show being done from a rooftop, means that Rapid Blue and M-Net are again recording another footnote in the record book of South Africa's television history.

"TV shows are generally produced in standard studios, but finding a studio space that is large enough, centrally located and able to accommodate the required parking is always a huge challenge," says Kee-Leen Irvine. "Being able to work from a Dome at the top of Hyde Park Corner is really unique and interesting."

The Dancing with the Stars SA Dome will seat approximately 350 people as part of the show's audience where co-presenters Chris Jaftha and Tracey Lange will hold sway. Construction of the dome and ballroom started just over a week ago on 8 January.

"Often the architecture of a show of this nature resembles that of a theatre, for instance a stage and raked seating."

"Dancing With The Stars SA is unique in that we're essentially recreating a ballroom, and all the action takes place on a competition standard, 15 x 9 ballroom floor, with the audience seated around it on either side and at the front of the house – almost like a horse-shoe."

And how will the actual ballroom floor be tested? "Every season gets a brand new ballroom floor and being sturdy and non-slip, these floors are naturally more than equipped to handle the impact of the dances," says Kee-Leen Irvine.

"We're really pleased that Hyde Park Corner is such a prestigious, easily accessible venue for Rapid Blue, M-Net, and the cast and audience. It comes with great parking facilities and a variety of restaurants where guests can enjoy a snack before or after the show."
on 12:32:00 PM