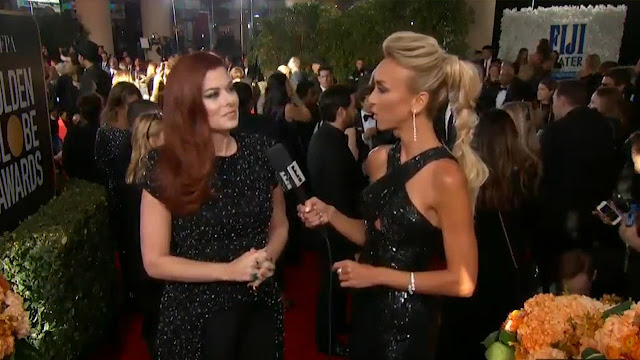 E! Entertainment's (DStv 124) pre-show red carpet coverage of the 75th Golden Globe awards on Sunday night in Los Angeles was unbalanced (meaning unequal - not crazy), awkward, cringe-worthy and coming across as out of touch and tone-deaf - raising questions about the extent to which E! and the NBCUniversal people running E! News are really still in touch with how Hollywood has changed and is changing.

The coverage of the 75th Golden Globes on E! late on Sunday night and in the early hours of Monday morning - South African and African time - was quite insightful for the way in which E! showed on E! how distant and somehow detached the NBCUniversal pay-TV channel that covers the world of entertainment, has seemingly become.

For a channel that for years has made as if it has the "inside track" on Hollywood's entertainment biz, E!'s Sunday night Golden Globe coverage showed E! to not just be somehow "out of the loop", but even worse: part of the problem.

Whose to blame for this? Ryan Seacrest Productions? Co-hosts Giuliana Rancic and Ryan Seacrest who haven't been a day-to-day part of E! and E! News for years but who now only parachute in for red carpet coverage?

Or the litany of unqualified "showbizzy" quacks E! lets loose to screech and squeal for 4 hours without substance?

NBCUniversal and E!'s Golden Globes red carpet coverage team for its Countdown to the Red Carpet: The 2018 Golden Globe Awards seemed wholly - wholly - unprepared, unqualified and lazy for this year's awards ceremony, unable to substantively cover it in a new way, given how the atmosphere and themes in Hollywood - and impacting on the Golden Globes - had changed.

As women (and men) wore black as part of the #MeToo and #TimesUp movements and campaigns, E! didn't seem to have any real interest, or any real plan on covering it comprehensively or properly - as if E! executives have put zero thought into it. It showed.

E!'s Giuliana Rancic said E! would ask this year "why you wearing black tonight? instead of "who you wearing" - odd, because it's not supposed to be a binary issue.

E! should be able to ask lots of different questions of Hollywood celebrities. It's not necessary for anything to be either a "just this" or a "just that" case.

If anything, E! should simply (have been) able to broaden its own scope by including an exploration of the issue of sexual harassment in Hollywood for a deeper perspective, instead of going for an overly-fixated focus on one issue (which it didn't even do), and discarding another.

E! should be able to - and can - ask people about their clothes and their causes.

Even with that said, E!'s Live From the Red Carpet: 2018 Golden Globes came across as reluctant to even really explore and ask celebrities about #MeToo and #TimesUp and was very one dimensional in its approach.

While Giuliana Rancic - very robot-like as if it's the one default, go-to question she remembers - asked some women, Ryan Seacrest couldn't even be bothered to try and ask any men.

E! peppered actress after actress with questions about workplace discrimination, sexual misconduct and gender disparity - but with a kind of heavy-handed approach, lacking any organic subtlety.

Yet E! and especially Ryan Seacrest - himself accused of misconduct and under investigation - couldn't get himself to ask a single man questions around the same topics.

E! seemed weirdly lost on Sunday night, or at the very least "behind" the times.

Then of course there were Debra Messing, Eva Longoria, Laura Dern, Sarah Jessica Parker and others also took to E! to slam E! during its live coverage, about its refusal to pay women as much as men for doing the same job and over how badly E! treated Catt Sadler who decided to quit because of NBCUniversal's gender pay gap at E!.

Interestingly celebrities spoke more on E! about the pay disparity between men and women - an issue where E! is part of the problem - than what E! has been willing to talk about since December 2017.

Some unknown person named Justin Sylvester was one of the B-grade presenters roped in by E! to do its backdoor coverage. Of course if you hire amateur, you get amateur, and the B-graders didn't disappoint, making E!'s Golden Globe red carpet coverage look oddly off-kilter.

E!'s Kristin Dos Santos who was also in the "skybox" again this year remains imminently qualified, knowledgeable and experienced to do red carpet coverage at a TV and film awards ceremony.

The problem is the other who-are-they's that E! has fanning out for red carpet titbits and who are neither skilled, not informed.

"Our coverage is woke!" exclaimed the one called Justin Sylvester, clueless about the irony of just how out-of-touch he made E! look as the gaggle of up-and-comers huddled at the drop-off area where the stars' limousines stop before they start their red carpet walk.

Will NBCUniversal and E! executives, as well as E! News staffers go and sit and do a post mortem to try and improve and better align future red carpet coverage with how the showbiz world as an industry but also the world at large is and has been changing? They really should.

E! seems to wants to do red carpet coverage like how Joan Rivers did it in her heydays. There's nothing per se wrong with that, but E! either missed the memo or refuses to read like Donald Trump, while the world has changed.

Should NBCUniversal and E! look at upskilling and possibly trying to find better people with the right knowledge and tact to do better red carpet coverage at awards shows where presenters have to know enough, and know what to do, as well as be able to tread water waiting for celebrities to arrive?

Definitely, if it wants to remain relevant.

E!'s robocall-like, one dimensional Golden Globe coverage was phlegmy and its lack of questions about #MeToo to men, very self-evident of how ingrained its own gender disparity issues actually are at E!.

The world has changed and it's time for E! to wake up and to adapt; to change and organically broaden its red carpet coverage.

E! seems yet to realise that its award show coverage will become irrelevant if it continues to hark on with the same-old, same-old, instead of purposefully strategising on how to realign itself with how the red carpet - and those who walk on it - has evolved.