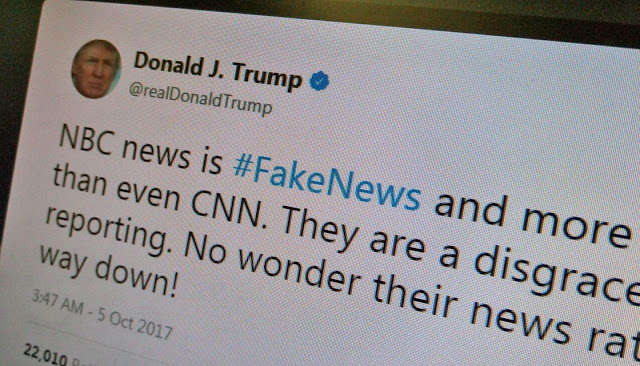 The American president Donald Trump finally announced his inaugural “The Most Dishonest & Corrupt Media Awards of the Year” with TV news channel CNN (DStv 401) winning the most "categories" and with mentions also going to The New York Times, ABC News and The Washington Post.

The Fox News channel, Breitbart and Drudge got shut out and won no mentions at the "awards" that was quickly nicknamed the "Fakies".

The American GOP political party's website crashed on Thursday where the list was published while Donald Trump failed to have a ceremony or hand out actual awards.

Donald Trump originally announced that his 2017 Fake News Awards would be taking place after the Golden Globe Awards.

The American late night host Stephen Colbert immediately started a "For Your Consideration" campaign like what producers and studios do for the Emmys, Globes and Oscars, and created and rented a massive Times Square billboard in New York for his The Late Show, promoting the show to win in categories like “Fakest Dishonesty,” “Smallest Button” and “Least Breitbarty”.

The South African comedian Trevor Noah of The Daily Show on Comedy Central (DStv 122) responded by taking out a full-page ad in The New York Times and canvassing for The Daily Show as "most deserving" of a Fakie.

Then Donald Trump inexplicably postponed his Fakies to Wednesday, January 17. He explained that his fake news awards were moved since “interest in, and importance of, these awards is far greater than anyone could have anticipated!”

Wednesday also came and went and finally on Thursday a list was published. It had no categories and was just a badly done 11-point list:


1. The New York Times' Paul Krugman for claiming on the day of Donald Trump's election victory that the economy would never recover.

2. Brian Ross who was suspended and demoted by ABC News after inaccurately reporting that the ousted National Security Adviser Michael Flynn was going to testify that Donald Trump, while still a candidate, ordered Flynn to make contact with Russians.

3. CNN wrongly reporting that candidate Donald Trump and his son Donald Trump Jr. had access to hacked documents from WikiLeaks.

4. TIME magazine reporting that Donald Trump had removed the bust of Martin Luther King Jr. from the Oval office in the White House.

9. CNN reporting that the former FBI director James Comey would dispute Donald Trump’s claim of being told he’s not under investigation.

11. "And last, but not least: "RUSSIA COLLUSION!" Russian collusion is perhaps the greatest hoax perpetrated on the American people. THERE IS NO COLLUSION," says Donald Trump.


No laughing matter
In reality "awards" trashing the press are no laughing matter - a record number of journalists were jailed or killed worldwide in 2017, while journalists continue to be censored, abused, arrested, jailed and killed for their reporting around the globe.

The number of journalists globally in prison is at a record high.

In response to Donald Trump's "Fakies", The Committee to Protect Journalists (CPJ) announced their own CPJ Global Press Oppressors Awards.

The Global Press Oppressors Awards recognise world leaders who have gone out of their way to attack the press and undermine the norms that support freedom of the media.