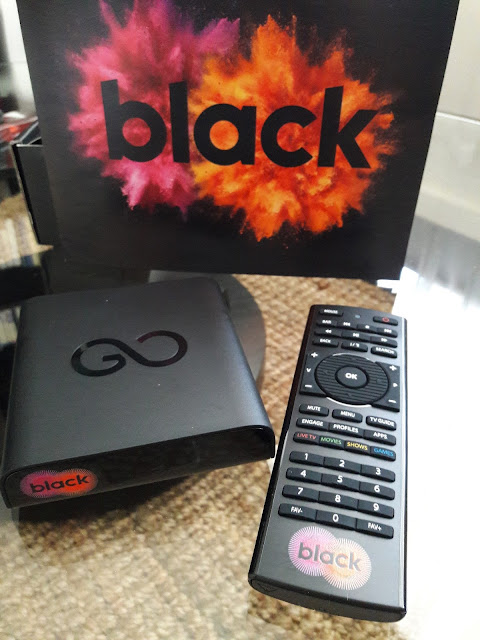 This is its unboxing and how it looks: 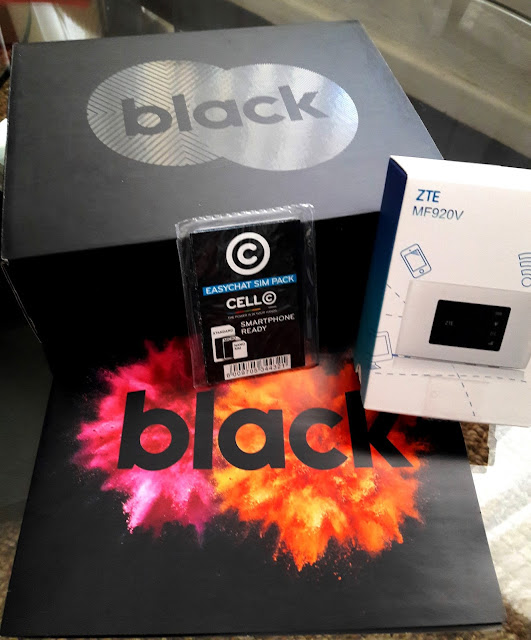 For review purposes Cell C couriered over to TVwithThinus and gave other select press and TV critics:

■ A black STB starter box called a blackBOX that includes the STB and remote control (R1499).
■ A portable mini WiFi router (ZTE MF920V LTE Ufi) (separate price unknown).
■ A Cell C SIM card that had to be RICA'ed.
■ A voucher code for a month's subscription to black BINGE Premium Plus (R389).
■ A voucher code for 1 free movie rental (R35).
■ A 100GB blackDATA bundle that's valid for 180 days and that can only be used to stream black content (R999).

I immediately just used my own existing 10Mbps uncapped Telkom ADSL line to try out the black service for review purposes (more on that in a separate review article).

Only later did I go through the process of getting the SIM card RICA'ed, then getting the data bundle loaded, then setting up the portable pocket router and connecting it to the black STB.

Before you do anything else, in order to use the service you also need to register and create an account for the black service.

You can create a black account without having to pay anything or having to enter any payment details. 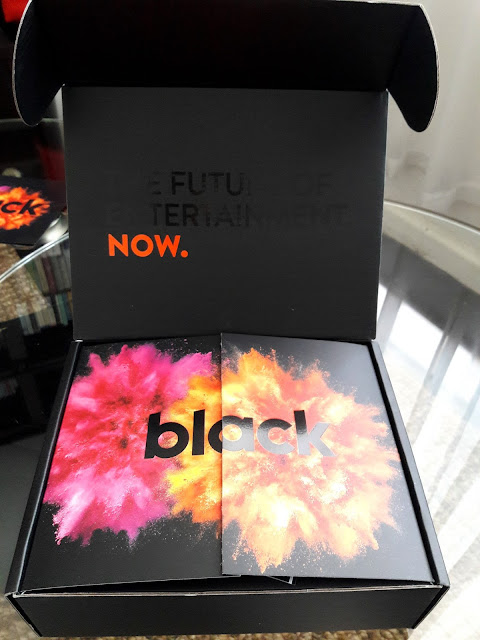 It folds open from the front with "The Future of entertainment. NOW." embossed on the inside lid cover, and two fold out flaps opening to the left and right. 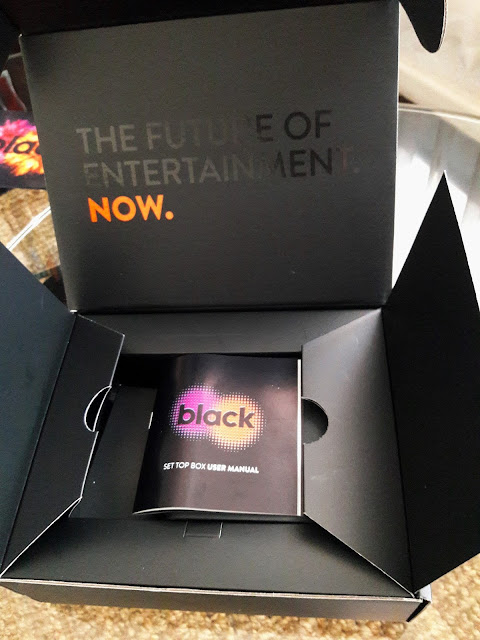 Inside and underneath the flaps is first a 14-page booklet - it's a mini instruction manual for users of the black set-top box.

Underneath that is the small blackBOX, a 2-prong power adapter, a remote control that users both sides (normal remote buttons on one side, a QWERTY-keyboard on the other side), and a HDMI cable. 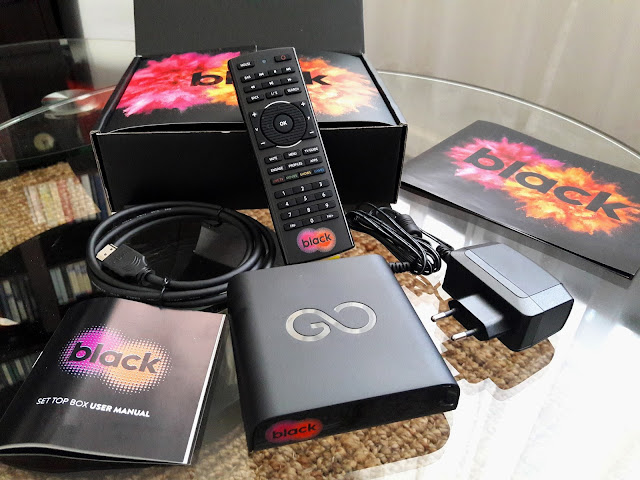 As to scale, the black remote control is smaller than MultiChoice's DStv remote control, yet it's bigger (longer) than the blackBOX, which gives you an idea of how actually tiny the set-top box it is.

As you can see from the image above, the set-top box is almost the size of its power adapter. 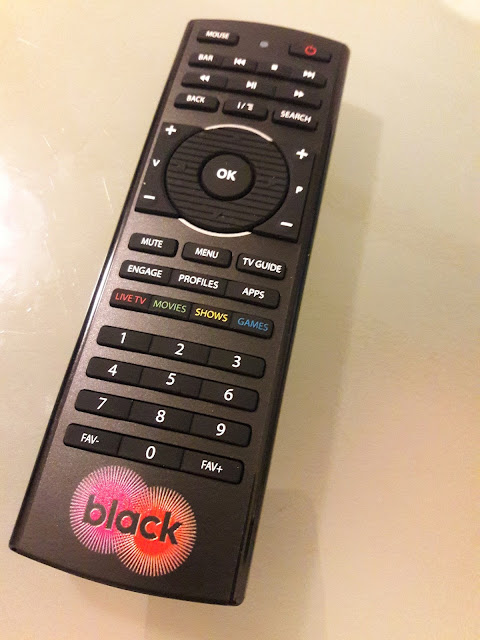 The back of the blackBOX remote control has a QWERTY-keyboard that makes it easier to type words and numbers to make registration and linking to whatever internet data service easier. 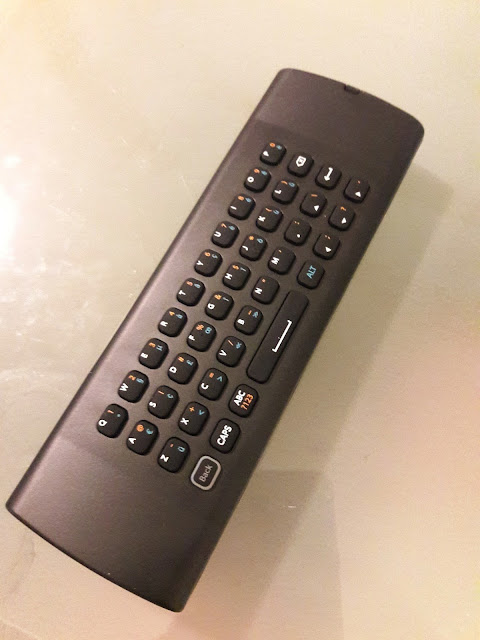 Ironically, initially it didn't seem to work very well, and I struggled a lot.

From learnt behaviour and knowing that the box must be able to get a direct signal, I intuitively kept holding the remote control with its traditional front end to the blackBOX and grew frustrated about the slow and non-response of the keyboard.

Then I discovered you're supposed to hold it like a keyboard in front of you, pointed to the blackBOX.

The remote control doesn't just have a traditional infrared light-emitting diode (LED) at the front, but also one on the side. You can just point the "keyboard" at the blackBOX and type.

Once the blackBOX is connected to your TV set and you turn it on and connect it to your data service, you will see the "black" logo come on, after which the box will first check for a firmware upgrade to the latest version (there will very likely be a newer version than the one shipped with the box).

After the initial set-up and restart, you can enter your black user information.

It's better to register online on a desktop computer or laptop and then just enter those details on the remote control, than registering for the first time through the blackBOX, although the latter is possible (it's just more clunky).

As with a DStv or StarSat decoder there's now several menu screens you can peruse on the blackBOX interface where you can control and set your preferred settings. 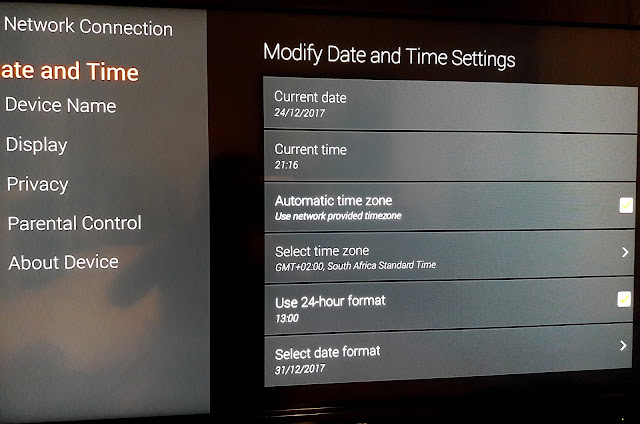 On these menu screens you can set everything from network and internet settings, privacy settings and things like how you want the time to display and other preferences.

Then there's the menus for the live, linear TV channels, as well as the on demand content and shows. 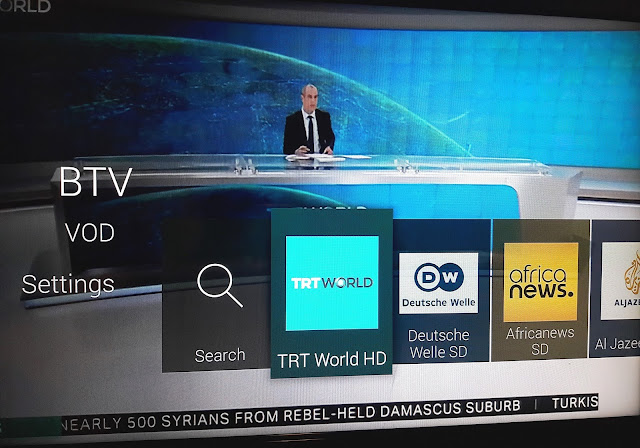 The best button on the black remote control is the MENU button right in the middle.

The BACK button that I've used the second most is wholly in the wrong place, it needs to be to the left of the MENU button. Basically the MUTE and BACK buttons should be switched around.

Some things about the blackBOX and Cell C's black streaming service really are great and are really surprising and quite remarkable.

Some things about blackBOX and black are frustratingly bad right out of the box and damages the user experience - a lot of it is the same problems that MultiChoice has with its DStv Now and DStv Catch Up services, but black has some additional issues.

I will address all of these in a review of the blackBOX and Cell C's black SVOD service.
on 9:27:00 PM