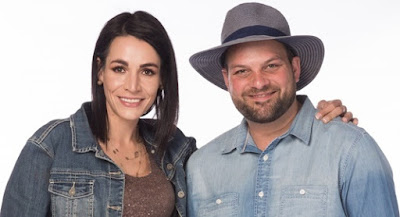 After winning R1 million in the first season finale of My Kitchen Rules South Africa on M-Net (DStv 101) on Sunday night, the overjoyed Bloemfontein couple Jamandi (31) and Machiel Bekker (36) talked about boob jobs to the press and said they’re definitely having sex to celebrate their win.

After taking home the title of South Africa’s best home cooks, beating out best friends Charnell and Kerry from Johannesburg in a tense five course cook-off in the final episode of the Endemol Shine South Africa produced show, husband Machiel at the post-show press conference held at MultiChoice City said "me and her tonight are probably going to make love – with the cheque next to us".

"We're going to start dreaming about that money only now because you can't dream of something that's not yours. We were up against very, very tough competitors and very strict judges."

"The thing that's most amazing about what's happened to us now is we didn't expect it. We never in a million years thought that we would get to this point. And Machiel and I have been crying for the past three days, preparing to lose," said Jamandi. "I'm just so overwhelmed."

About the experience Jamandi said the testing and grueling kitchen cooking experience against other teams "were worse than matric".

"On the day that the final episode was filmed, it was our 10 year wedding anniversary. And you know what's so amazing – my mother and father passed away when I was still young but to win today is amazing because it's my father and mother in law's wedding anniversary as well," said Machiel.

Jamandi said "this was the first wedding anniversary we didn't have sex on. So ja, it was difficult."

"For us being common, everyday people, the attention was a lot, but when we got a challenge we stuck together and did what Jamandi and Machiel wanted to do," said Machiel.

"Do you think in a lifetime you would experience something like this?" said Jamandi. "We're this plain, platteland [rural] Kurt Darren, Nicholis Louw people. Yes. Common. We are common," she joked to laughter. "But that's the way we are."

Jamandi said Machiel wanted to marry her "and I just got a boob job – that was the first thing he saw actually", after which Machiel interrupted and said "there was a second boob job as well!"

Jamandi said "until today and winning you never get that confidence that you are good enough. And until today, it's amazing that we won and I still can't believe that we've won. And this is going to change our lives."