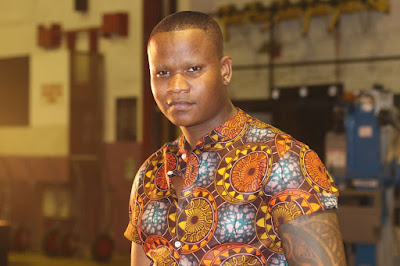 The Idols runner-up and “sore loser" Mthokozisi Ndaba (25) remains cloistered in Johannesburg and is under the care of medical professionals after struggling to deal with his bitter defeat against winner Paxton Fielies.

M-Net’s Mzansi Magic (DStv 161) channel that broadcast Idols has no idea when Mthokozisi Ndaba from KwaMashu, Durban who has gone to ground, will be doing interviews, with all media appearances and interviews this week that abruptly got canned.

Mthokozisi Ndaba has been branded a "sore loser" by the viewing public after blatantly storming off the stage at the Big Top Arena at Carnival City in the East Rand after Paxton Fielies (17) from Bishop Lavis in Cape Town was announced the winner at the end of Sunday night’s 13th season finale and sang her closing song surrounded by the rest of the top contestants.

He suddenly refused to attend the post-show press conference, the VIP prize-giving after party usually held in the Mardi Gras room at Carnival City, and declined to do any media interviews.

It's the first time in the history of the reality singing competition show that the runner-up refused to attend the post-show press conference and to appear supportive of the winner with Mthokozisi Ndaba’s behaviour, resulting in dueling negative headlines, that has so far somehow overshadowed what is supposed to be Paxton Fielies’ victory lap week.

According to reports Mthokozisi Ndaba already said before the start of Sunday’s finale that if he didn’t win, he wasn’t going to do media interviews.

After throwing open his life to the public and courting their attention, votes and engagement, he now wants privacy.

There are now fears that Idols possibly “broke” Mthokozisi Ndaba who is coming down from lofty expectations back to reality after a magical high-life in fame’s spotlight the past few weeks and that involved things like being surrounded by fluttering stylists, circling producers and cameramen helping to make him and the other contestants look and feel good and even a whirlwind tour to London.

In pre-finale interviews he already spoke of what he was going to do with his winnings only to see Paxton Fielies win the majority of the over 30 million votes cast during the final week of the show to take home the prize package worth over R1.5 million.

Brand damage setting in for no-show artist
On Tuesday an unverified “press statement” emerged allegedly from Mthokozisi Ndaba saying his behaviour was “a moment of weakness since I had wanted and needed this so badly, not just for me but for my family” and that he felt like he had let down those closest to him.

Nobody close to Mthokozisi Ndaba knows where the mystery “press statement” comes from that started circulating on social media and its authenticity couldn’t be verified.

Meanwhile brand damage is setting in for Mthokozisi Ndaba with potential clients and corporates who would have booked him for performances who will now think twice about whether they want a no-show artist who is seemingly unable to life up to the showbiz world’s golden mantra for stage performers of “the show must go on”.

With the runner-up getting prizes worth over R150 000, sponsors will also be privately miffed with Mthokozisi Ndaba since they’ve already lost out of the much-needed tit-for-tat exposure that comes from things like hand-over ceremonies, photos and interviews the runner-up does that include thanking sponsors.

Mthokozisi Ndaba’s manager, Kim Coppen, referred media enquiries to Mzansi Magic, saying the TV channel is responsible for his publicity until next week.

Nondumiso Mabece, head of publicity at M-Net for local entertainment channels, told TVwithThinus in response to a media enquiry that Mthokozisi Ndaba has not returned to KwaMashu but remains in Johannesburg and is being cared for by medical professionals.

“Mthokozisi is still in Johannesburg and under the care of medical professionals and the support of his family.”

“It is currently not clear when he will be conducting interviews and we ask that he be provided the space and privacy to come to terms with the show results”.

Mzansi Magic was asked when the channel realised that Mthokozisi Ndaba wasn’t going to attend the post-show press conference and if it’s true that he said he wasn’t going to talk to the media if he loses.

“Mzansi Magic realised at the point when the press conference was meant to commence that Mthokozisi is requesting to be excused,” says Nondumiso Mabece.

Asked if Mthokozisi Ndaba is aware of how his behaviour is impacting on Idols, Mzansi Magic and detracting from Paxton Fielies’ winning moment but above all impacting on his own brand as a stage artist, Mzansi Magic says that the channel “works with all the Idols contestants from the audition phase until the end of the show, on how to conduct themselves, especially during interviews and how to represent their respective brands”.

"Paxton Fielies has been enjoying her first few days as an Idols winner and has spent time conducting interviews, meeting with her agent and will be meeting with her recording label before she travels to Port Elizabeth where she will be performing at the end of the week," says Mzansi Magic.
on 12:50:00 PM