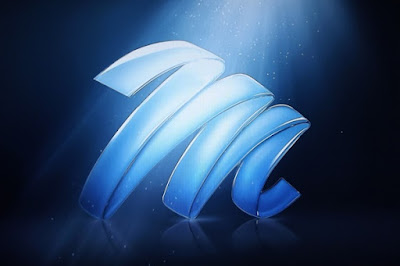 M-Net told TVwithThinus that the pay-TV broadcaster is "appalled by the advert, which was not authorised by us" and that "the advert you have alerted us to is racist, unlawful and disgraceful".

While the advert is legitimate and M-Net is indeed urgently looking for a commissioning editor for its scripted and reality division, M-Net is distancing the pay-TV broadcaster from the racist advert that was apparently contracted out and then subcontracted out again.

It's not clear if M-Net checks job adverts after they're placed - or if not, why M-Net doesn't scrutinise it's own job placement adverts when it's contracted out. 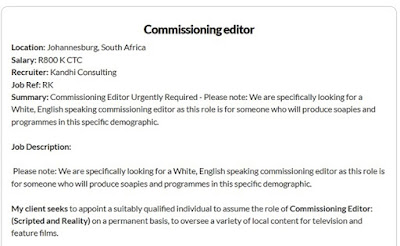 Ambit Recruitment has been working with Kandhi Consulting who has been subcontracted to run the shockingly racist job recruitment advertisement.

The job offer of R800 000 CTC (cost to company) M-Net executive position is for "a White, English speaking commissioning editor as this role is for someone who will produce soapies and programmes in this specific demographic".

"Please note: We are specifically looking for a White, English speaking commissioning editor" says the ad.

M-Net says it has sent letters to Ambit Recruitment giving notice of termination; to Kandhi Consulting demanding that it apologise and remove the advert from all platforms; and to Executive Placements, the website where the ad was found, asking that they remove it immediately.

"M-Net is appalled by the advert, which was not authorized by us," says the pay-TV broadcaster in a strongly-worded statement in response to a media enquiry on Sunday.

"M-Net would never be associated with any advertisement which only invites white applicants, which would be contrary to our recruitment policy, our values, the Constitution and other legislation. The advert you have alerted us to is racist, unlawful and disgraceful."

"We have established that without our knowledge, our recruitment agency sub-contracted another agency to advertise M-Net's vacancy for a commissioning editor."

"Our proposed advert sent to our recruitment agency for this vacancy made no reference to the race of the applicant," says M-Net.

"Our recruitment agency has advised us that it did not mandate the sub-contracted agency to word the advert in this racist manner."

"Our attempts to reach the sub-contracted agency by telephone have not been successful. We view this in the most serious light and are investigating the matter."

"We will take appropriate and firm action (including of a disciplinary nature) should we find that anyone on our behalf was involved in the production of this abhorrent advertisement."

"M-Net has a zero-tolerance approach to racism and takes incidents such as these very seriously," says the pay-TV broadcaster.

"Our employee profile is representative of our country's demographics at every level to the highest office. We have a level 1 BBBEE rating and we produce local shows that reflect our country's diverse cultures and languages."
on 2:01:00 PM