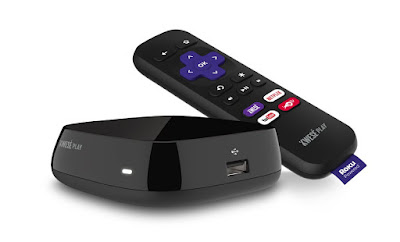 Kwesé Play is part of the pan-African pay-TV service Kwesé TV that is owned and run by Econet Media.

Kwesé TV is a pay-TV service that is already available in several other African countries and just added the countries of Botswana and Zimbabwe.

Kwesé Play is partnering with Roku and Netflix in Africa to offer the streaming channels and Netflix can for the first time be paid in South African rand.

The set of Kwesé TV's pay-TV channels available through its traditional satellite pay-TV service elsewhere in Africa is however blocked on the device for South Africa and not available, and can't be paid for or streamed through the device.

Econet, through the Kwesé Play Roku, however plans to roll out the Kwesé TV pay-TV functionality in South Africa eventually.

Kwesé is now targeting competitors head-on in the new South African TV arms race for not just space on the TV stand but also viewers' time, attention and their money.

Kwesé and its Kwesé Play is the latest TV service entrant to enter the fray where Naspers's satellite pay-TV giant MultiChoice and its DStv service, Naspers' subscription video-on-demand (SVOD) service Showmax, and other pay-TV players ranging from the Chinese StarTimes Media SA and On Digital Media's StarSat and other SVOD services like DEOD and ONTAPtv are battling for viewers' wallets.

Kwesé Play will target South African viewers who have ADSL, as well as fibre-to-home and LTE broadband users with its little black box that give access to 100 video-on-demand channels, including the American sports channels ESPN, NBA, Red Bull TV and things like YouTube, Iflix and TED Talks.

Kwesé Play Roku users will however have to pay for the large amounts of data needed to stream content through the device, with TV content streaming that remains data intensive and expensive in South Africa.

Kwesé Play Roku users also have to pay if they want to use Netflix.

Kwesé in a statement says it wants to be "Africa's source for the best in international and African programming".

The launch of Kwesé Play in South Africa comes in the same week and just 3 days after MultiChoice announced that it's bundling Showmax for free with DStv Premium subscriptions.

Partnering with Netflix for sub-Saharan Africa, Kwesé Play subscribers using Netflix as a SVOD on the box, can be billed by Kwesé in local African currencies, starting with the rand.

The Roku media box is approved by South Africa's broadcasting regulator, the Independent Communications Authority of South Africa (Icasa) and users can watch content in high definition (HD) in 720p and 1080p.

The Kwesé Play Roku that comes with a HDMI cable, also has a microSD card slot, and supports WiFi and has an ethernet port.

The Kwesé Play streaming box is the first set-top box in Africa to officially include Netflix as a service, says Kwesé. The remote control has a branded red Netflix shortcut button and a purple Kwesé shortcut button.

South Africans who sign up for Kwesé Play before the end of January 2018 will get a 3 months free Netflix subscription.

Kwesé Play can be brought through takealot.com, FNB, VOX and at Cellucity, Ellies and Incredible Connection.

"The number of connected homes in Africa continues to grow at an impressive rate and we expect to see strong uptake of Netflix in our markets," says Joseph Hundah, Econet Media president and CEO in a statement about the Kwesé Play and Netflix Africa tie-up.

"The current number of active subscribers is a fraction of what we both believe the potential to be. We see this as an opportunity to expand Kwesé's multi-platform offering while bringing the best in original general entertainment to households across the continent".

Maria Ferreras, Netflix vice president of business development for the Europe, Middle East and Africa (EMEA) region says "African customers are demonstrating their enthusiasm and appetite for internet television and we believe they should be able to access the best shows in the world at the same time as everyone else, without the restrictions of a linear schedule."

"We're working hard to make this a reality and we are thrilled to be working with Kwesé to make it easier for people to access and enjoy our service."

Netflix has several American shows and upcoming new shows exclusive to the platform ranging from Shadowhunters and Designated Survivor to Marvel's The Defenders. The new Star Trek: Discovery will for instance start to roll out internationally and in Africa and South Africa on Netflix from the end of this month.

Here's the channels available on Kwesé Play in South Africa at launch with more channels that will continue to be added: