Coca-Cola and e.tv's Coke Studio - now Coke Studio Africa - continues to be a mess that doesn't know the press or want to tell TV critics about it. 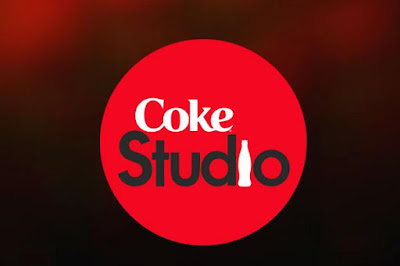 Coca-Cola Africa's advertiser-funded production (AFP) Coke Studio - now renamed Coke Studio Africa - and back on television, continues to be a sad mess that doesn't seem to know or care for the press or to get any actual earned media coverage for its marketing vehicle that is its TV show.

Based on what it's doing - or rather not doing - one thing that's definitely certain, is that the Coca-Cola e.tv music show doesn't much care about coverage, or for any of South Africa's TV critics for that matter.

Earlier this year I got wind of the next iteration of the TV show on my own - because heaven forbid that a brand like Coca-Cola in South Africa should research and find relevant media and reach out through their own PR and marketing division or through some competent hired-help PR company and actually, you know, communicate.

Out of my own initiative as a journalist covering television - and getting nothing in the past for previous seasons of the show on e.tv - I decided to look up and contact Coca-Cola's media communication people myself.

In early June this year I let them know that I'm actually interested in the show, interested in getting communication from them on the show, and that I'd like to be kept in the loop so that I can report to the people they presumably want to reach - consumers and viewers watching Coke Studio.

Unfortunately Sharon Keith, Coca-Cola marketing director for Coca-Cola Southern and East Africa and her PR team who said they would keep me updated when I reached out about the show, failed to do this.

It's sad to see how Coca-Cola would put its name on a TV show but be completely clueless about the media actually covering the show.

Queue for instance last week Thursday when Coca-Cola in South Africa decided to have a media launch for the "media" for Coke Studio Africa 2017.

"Media" is quotation marks since the "group" of people were from Johannesburg only - people that Coca-Cola presumably considers to mean or represent all-media in the country, not bothered with what's outside of the comfy Jozi media bubble.

Not only did Coca-Cola do nothing for press in other cities, it wasn't even aware and couldn't be bothered less to find out who they are, or to tell them about the media event and launch for Coke Studio Africa 2017.

Ironically, the bulk of media covering television - a large group of print journalists and even radio from Cape Town, Durban and Port Elizabeth were actually all in Johannesburg since Thursday attending a number of different TV show media events.

All of those media would have been able to - and several definitely would have attended - Coca-Cola and e.tv's media event for Coke Studio Africa 2017 in the early afternoon - if only Coca-Cola's oblivious communication team dealing with media were actually up to scratch. 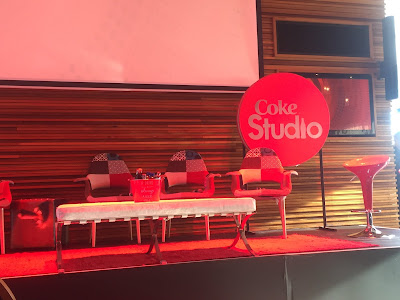 It would have cost Coca-Cola in South Africa nothing - not a cent - to get them there, but what it does require is actual knowledge of the media, who and what exists out there in the media sphere, and to have actual media relationships with the media.

Presumably working with e.tv, Coca-Cola couldn't even be bothered to ask e.tv for their media press list - and keep in mind this is for a show being broadcast on e.tv.

What would be, could be, and can be a win-win for both brand and press, Coca-Cola once again turned into a lose-lose with its seemingly can't-care-less media attitude.

Although Coke Studio Africa 2017 is shown on e.tv, I'm told that this Coca-Cola TV thing - just like in the past when Coca-Cola also did nothing to reach out to those covering television - is run entirely by Coke Studio and their PR team.

I was told in no uncertain terms that it's up to them to choose who to invite.

Sticking with just Johannesburg media, it's been interesting to see the lack of actual stories on Coke Studio Africa 2017 from the actual media event from the Johannesburg media who attended between Thursday and Sunday, and even afterwards.

Then again, Coca-Cola and its PRs couldn't even bother to give the media that attended and those who didn't attend pics, or transcripts of the interviews with musicians and executives or press releases of who said what at the media launch.

Those who attended couldn't even bother to run Coca-Cola's Coke Studio Africa 2017 press release, which makes one wonder what the aim of it all is, and what the actual return on investment is if you keep engaging people who does very little, while ignoring a group of media who actually, presumably, actually care.

Speaking of the Coke Studio Africa 2017 press release - it looks and feels incredibly trash-amateur and brand damaging when the press release you're sent is awash in a red mess of edits that looks like and is an unfinished work in progress.

This is how Coca-Cola's bad press release looked when I opened my email: 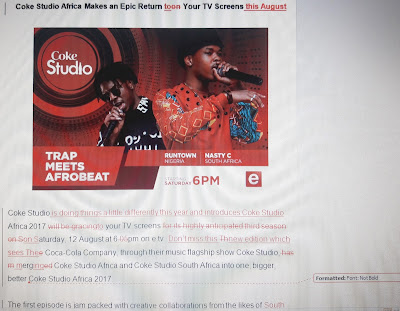 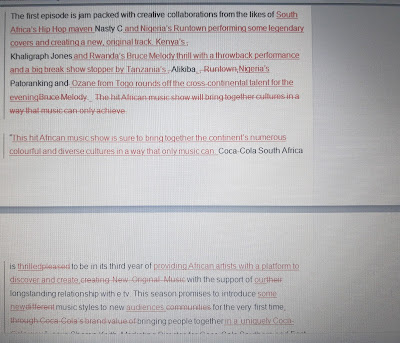 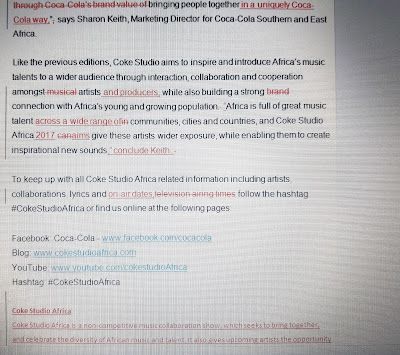 This mediocre nonsense is so cringe-worthy and embarrassing that it basically made the decision for me as a journalist.

After I laughed I thought that Coca-Cola and e.tv obviously think so little of something they're involved with that since they care so little, clearly so should I.

Better to just not care going forward and to spend my time focusing on other TV shows that actually do bother and do matter and do take the actual time and effort to properly engaged with relevant media.

Earlier this year Clover and its Tropika marketing and PR team did excellent work with the latest season SABC3's Tropika Island of Treasure.

Although also an AFP on TV, Tropika through its PR agency knew, contacted, kept in touch and constantly issued relevant, correct and timeous press information.

It knew who to deal with, involved the media, and created a win-win between brand, TV show, the press and TV critics covering it.

It's sad for me to see how bad Coca-Cola became in terms of how it deals with media since the days when it used to still be a sponsor of Turner Broadcasting's CNN MultiChoice African Journalist Awards done by CNN International and MultiChoice and for a couple of years in Africa as well as in South Africa held these wonderful media event engagements and came across as very professional.

It feels weird struggling to get basic information about something superficial like a Coke sponsored TV show from a company that wowed me in the past with talks about its corporate social investment initiatives and actually educated me with some stories about the upliftment of Africa's people - especially women - that I remember to this day.

So, apologies for not covering Coca-Cola and e.tv's Coke Studio Africa 2017 as a South African TV critic, but it's a mess that doesn't seem to want to be covered - and therefore going forward, neither will I.