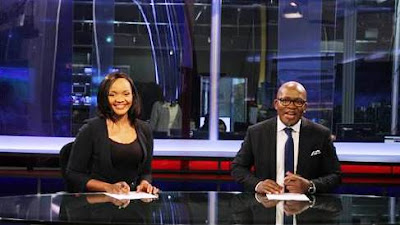 From 22 May the longtime eNCA reporter and anchor Cathy Mohlahlana will take over in prime time - any news channel's showcase timeslot - together with Vuyo Mvoko as the new co-anchor team on NewsNight.

The experienced Cathy Mohlahlana has anchored across several timeslots on the news channel from eMedia Investments supplied to MultiChoice's DStv satellite pay-TV platform in the past.

Vuyo Mvoko was recently roped in for a reporting test drive after he was abruptly fired by the South African public broadcaster as one of the vocal so-called "SABC8" journalists who opposed former chief operating officer (COO) Hlaudi Motsoeneng's TV news censorship order.

While Cathy Mohlahlana's promotion to its flagship eNCA show was expected, Vuyo Mvoko's quick elevation is surprising since news channels usually reward internal anchors and reporters who've paid their dues and done anchoring and field reporting over years and who are familiar, trusted faces to viewers.

Vuyo Mvoko's show On the Record on SABC News (DStv 404) was abruptly cancelled by the SABC in March 2016 following behind-the-scenes censorship conflict, after which he penned a scathing "My hell at the SABC" front page editorial newspaper piece in July 2016 about the failing internal workings of the SABC newsroom.

"Vuyo brings political knowledge and years of experience and Cathy has excelled as an anchor since she moved from field reporting," says Mapi Mhlangu, eNCA news director.

Vuyo Mvoko says "with everything going on in the country today, Cathy and I hope to rise to the challenge of telling the story as it unfolds."

Cathy Mohlahlana says "Vuyo is someone I have the utmost respect for and I look forward to beginning this new chapter with him."

From 22 May Jeremy Maggs will move to front NewsDay between 13:00 and 16:00 on weekdays, that will see Michalle Craig and Shahan Ramkissoon pushed from this timeslot to mid-mornings where they will now anchor 9:00 to 13:00.