Real Talk with Anele on SABC3 makes its 3rd season debut today with a new set and a new 5pm timeslot as Anele Mdoda switches to live broadcasts five days a week. 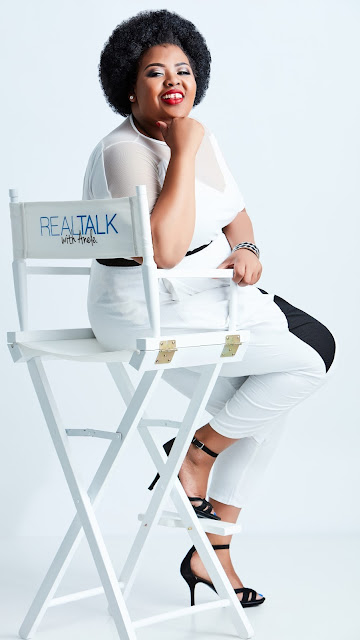 Buoyed by boffo buzz the third season of talk show Real Talk with Anele kicks off today in a new timeslot one hour later at 17:00 on SABC3 and broadcast live, with the channel hoping to translate the social media interaction and positive reception into bigger ratings.

Since the start of Anele Mdoda's local talker in mid-2016 produced by Cheeky Media, that replaced Three Talk with Noeleen, the show has managed to draw attention for the type of guests and their comments, and kept viewers engaged.

What so far lagged has been the viewership but after giving Afternoon Express a chance in the 17:00 where it didn't live up to ratings expectations, SABC3 has now switched the two shows.

Real Talk with Anele moves to 17:00 from today for its new third where Anele Mdoda will get a chance to try and capitalise on bigger ratings at a time when more potential viewers are available to tune in.

The third season of Real Talk with Anele is getting a revamp, and from today viewers will notice a new set of the show and with different couches, but still filmed at Steyn City.

The big difference is that besides the new 17:00 timeslot, Real Talk with Anele , that last month won the 2017 Safta award as best talk show, will now be broadcast live for 5 days a week, with Anele Mdoda who will try to bring an even greater immediacy to the show.

The show's bookers are also more determined to find and get guests who viewers haven't tired off and who haven't over-exposed themselves with multiple previous rounds on the talk show and radio interview circuit.

Also new are panel discussions. Besides single guest episodes, Anele Mdoda will host round-table discussions from time to time with a guest panel of experts around certain topics.

"Guests invited will vary from the standard rehashing of well-known names which most talk shows in South Africa encounter," said an insider.

Real Talk with Anele will continue to push the boundaries of South Africa's talk show industry and will interview people behind some of the country's groundbreaking achievements.

"Real Talk presents to viewers real people just like them, with real stories that are both engaging and call for action," says the show.

"Real Talk is a stimulating contrast between famous and fresh faces, news and opinion, fact and fun."


First week's guests
The first week's guests include Lindiwe Hani today, who will talk about her new brutally honest book and how the assassination of her father sent her on a downward spiral into cocaine and alcohol addiction.

On Tuesday Anele Mdoda will interview artists Nandi Madida, and on Wednesday the celeb journalist Lesley Mofokeng will discuss some of his memorable interviews.

On Thursday Anele Mdoda will sit down with artists Kahn Morbee.

On Friday Real Talk will have a panel show that includes Ntateko "Takkies Maswanganye, Toll A$$ Mo and Rainette Leibowitz unpacking cyber dating and how social media has revolutionised the dating scene and relationships.
on 10:20:00 AM