BROKEN SYSTEM. Why I care as little about the Broken Vows telenovela from Clive Morris Productions as e.tv's publicity division ... if you even care to know. 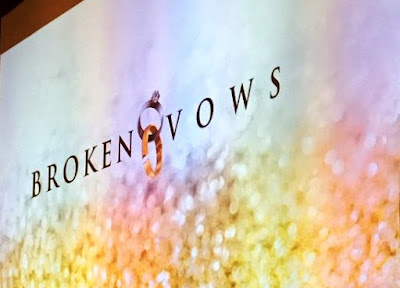 If you're looking for coverage here of e.tv's new telenovela Broken Vows ... sorry. You won't find any.

And to spare you the driftwood of this lament following after this sentence - unless you want the gory details - is that once again e.tv hasn't done itself any favours in promoting Broken Vows in its inexplicably bad publicity strategy.

For the second time in months (after it also employed the same playbook page for Hustle in latter 2016), e.tv did a press screening of a new local show, but only for Johannesburg media.

In the apparent isolated and bubble-world of e.tv's reality, it seems that e.tv broadcasts just in Jozi as if it's a community TV channel like Soweto TV.

As it's non-sensical geographic discrimination continues, e.tv could again not bother to tell journalists covering television nationally - but not living in Johannesburg - that there would be a screening for its latest local TV show, or make a basic arrangement for press based elsewhere in South Africa to see it too (like for instance at e.tv's office in Cape Town and Durban).

e.tv apparently doesn't believe - and please excuse the passive aggressive schmaltz - that Broken Vows from Clive Morris Productions needs more exposure or publicity, which is fine. It will now be ignored.

With more TV channels and shows on South African television that what one can reasonably get to, and with a lot of places doing a lot of PR effort to try and get the word out, this TV critic, for one - and I know there's others - won't give Broken Vows that couldn't be bothered to get itself as much media attention as it could have, any.

When e.tv held a media screening for Broken Vows late last week, e.tv's publicity department - where publicist leave without saying goodbye and people actually star in their own shows on rival pay-TV channels - didn't care that the media that it supposedly foster or presumably want to foster relationships with, won't be able to see it.

I can't help but feel that it's part of a bigger laissez-faire attitude at e.tv. More than a week ago I asked e.tv's publicity department for publicity images of Broken Vows. I was then told someone would help. By this past Friday, a week later, still nothing.

Hilariously, sadly, after Thursday evening's press screening where the Broken Vows cast, production executives and e.tv execs were also present, there was one story from the Johannesburg media who attended. One.

That one story didn't even report on any of the comments of Clive Morris or e.tv who all spoke, or who else said what, or how the show actually is that media were shown.

Neither has e.tv yet bothered to issue any press release or statement about who said what at the actual Broken Vows press screening, or to give out talking points or comments about the show. And it's clear there won't be.

Media who actual care and who are interested in the TV of it - instead of some smarmy Johannesburg media who attended the screening at the Four Seasons Westcliff Hotel for the glitz and the liquor but as usual did nothing - were also not able to capture and report what was said themselves.

But hey, this strategy obviously somehow works for e.tv and the broadcaster's publicity division.

Late on Friday afternoon, at 4pm, e.tv send me a link to watch Broken Vows after I asked early on Friday morning if media and TV critics elsewhere in South Africa were also given an opportunity to see the Clive Morris Production show beforehand.

When e.tv showed me the wonderful courtesy of sending me a link at 4pm on a Friday afternoon, I decided that I'm not spending my time and giving my effort to watch an e.tv show over my weekend in my personal time when e.tv showed just how little it actually cared to bring Broken Vows under longtime media's attention.

Not one of the almost dozen journalists and TV critics covering television in South Africa and not living in Johannesburg even knew that e.tv had a Broken Vows press screening when I reached out to ask them if they perhaps knew anything.

While M-Net issues press releases during episodes of The Voice SA, Mzansi Magic does so for Idols during and immediately after episodes, e.tv does absolutely nothing for shows like Ultimate Braai Master and others.

e.tv only issues press releases for SA's Got Talent days after there's been a winner for instance, and barely does anything for eNCA programming (you have to discover for yourself there's an African round-up show again on the channel for instance, if you happen to bother to search yourself).

Whatever the reason, this type of "day late dollar short" strategy clearly works for e.tv, since it continues.

Who it doesn't work so well, is for the media covering e.tv, where the red letter channel is one of more than 123 channels available to South Africa's 19.1 million TV households and its combined 44.1 million TV viewers.

I will continue to cover Broken Vows from a news perspective, for if or when it makes news, ratings news, or otherwise lands on my radar because of something happening with, or around, the production.

What I won't be doing is actually watch Broken Vows, tune in for it, or make any effort to try and follow it when there's so many other shows demanding my attention. Forgive me for not being able or willing to tell you as the reader if it's any good and if you should be watching it.

e.tv couldn't be bothered, and neither therefore can I.

Like a Victorian bobby on the beat at a horrific crime scene, waving off actually interested passers-by, e.tv has made it patently clear that Broken Vows doesn't want or deserve any attention from the media people like me: "Move along, move along. Nothing to see here."
on 2:41:00 PM