M-Net says new update show The 101 is an important communication tool; will be doing more fact-checking to ensure all information is 100% correct going forward. 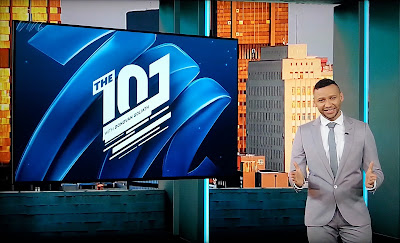 M-Net says its putting more fact-checking procedures in place for its new The 101 programming update show to ensure that all information is 100% correct going forward.

M-Net responded to a media enquiry from TVwithThinus, following the first broadcast episode of The 101 on Sunday afternoon on M-Net (DStv 101) that didn't bother to check quite a number of things, and got it wrong.

M-Net says "The 101 show is an important new communication tool for M-Net to navigate our viewers through our content and we do apologise for having incorrect information in the first broadcast".

"The show producers at Red Pepper Pictures Pictures receive all of their information from the channel, and unfortunately these errors slipped through the cracks between script writing and final edit process".

"We are putting more fact-checking procedures in place to ensure that all information shared is 100% correct going forward".

As to why Virgil Prins and Ebenhaezar Dibakwane didn't make it to air as co-presenters in The 101 after they were announced to the press as co-presenters with Donovan Goliath, M-Net says the show's format changed.

"As this is a brand new format, we have been experimenting with different creative options and recently decided that the show will only be studio based. Virgil Prins and Ebenhaezar Dibakwane were initially contracted as field reporters but these inserts have fallen away".

M-Net said viewers will also be able to watch The 101 on MultiChoice's DStv Now but on Sunday it wasn't possible to stream the show.

DStv only gave subscribers looking at a live streaming version of M-Net the grey card message that "DStv Now doesn't have the rights to show this" for the half hour duration of The 101.

M-Net reiterates in response to a question that The 101 is supposed to be viewable on DStv Now.

"The 101 is streamed on DStv Now during the broadcast and will be available on DStv Catch Up from Mondays".
on 6:29:00 AM