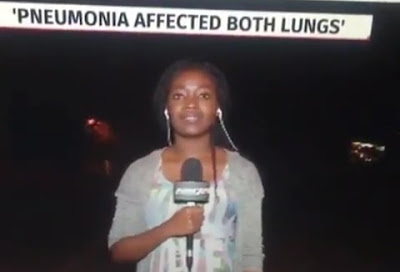 The latest highly embarrassing coverage of the Gupta-owned TV news channel ANN7 (DStv 405) is going viral as people are watching the jaw-droppingly bad live report the channel did about the late Ahmed Kathrada's worsening condition a few days ago.

The inept ANN7 reporter who seems unsure of what and who exactly she's reporting on, and struggles to speak, even refers to Kathrada as "Cartwright" during the live report and also goes: "Guys, I can't" during the live crossing to ANN7's Midrand studio.

While she's pulling faces, she reports that Ahmed Kathrada was "going in and out of the coma".

The ANN7 on-air blooper is the latest in an ongoing string of jaw-dropping mistakes since the Infinity Media news channel launched on MultiChoice's DStv satellite pay-TV platform in August 2013 with a litany of extremely embarrassing on-air gaffes.
on 1:43:00 PM