A prominent screenwriter is suing The Walt Disney Company, alleging that the mouse house stole Zootopia from him and wants the case to be heard and seen before a jury.

Zootopia, that won the Golden Globe and Oscar earlier this year for best animation film is his idea, not Disney’s, says Gary L. Goldman who has filed a lawsuit claiming copyright infringement, arguing that “Disney Zootopia is substantially similar to the Goldman Zootopia” in a 37-page court filing.

In the eye-popping court papers, Goldman alleges that Disney copied not just his Zootopia film name for its film, but also its “themes, settings, plot, characters, and dialogue – some virtually verbatim” after he pitched his Zootopia idea to Disney in 2000 and again in 2009 and got rejected both times.

Goldman, a veteran screenwriter who wrote the scripts for films like Total Recall, says Disney even copied his character designs and artwork, and includes striking graphics to show how Zootopia’s main characters mirror the characters he created.

Disney in a statement says Gary L. Goldman’s lawsuit “is riddled with patently false allegations. It is an unprincipled attempt to lay claim to a successful film he didn’t create, and we will vigorously defend against it in court.”

In his court papers, Goldman goes through the alleged copyright infrigements one by one and how his Zootopia characters are nearly identical to Disney’s Zootopia. 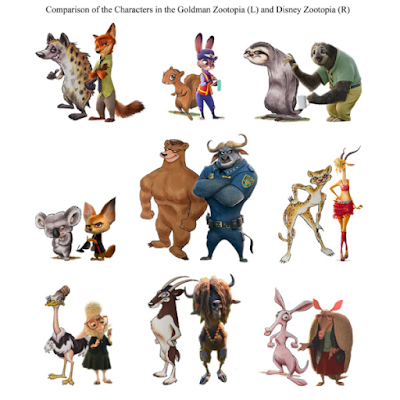 Goldman’s script for instance has a squirrel named Mimi – cute and optimistic – who is discriminated against. Disney’s Zootopia has Judy, the bunny cop.

Goldman’s tall, horned Asian mountain animal running a club he named Max is called Yax in Disney’s Zootopia and is the same type of animal, and also running a club.

He does this for all of the main characters and shows how their attributes are the same as those of the characters of Disney’s Zootopia.

Same setting, themes, story, poses, characters
Goldman says besides copying his word “Zootopia” – a portmanteau that he came up with – even even dialogue from his treatment shows up almost verbatim in Disney’s Zootopia.

“Each of the works addresses the issue of whether, in a diverse society as represented by the different species of Zootopia, one can be anything he or she wants to be.”

“A corollary theme is whether, in order to do so, one can overcome not only the prejudices inherent in a diverse society as represented by Zootopia, but also the prejudices within oneself as a member of such a society,” says Goldman’s lawsuit.

Goldman explains how the settings of the two Zootopia’s are the same and even the story.

“Artwork in the two Zootopias has the same subject matter and substantially similar appearance, including shapes, colours, body structures, poses and facial expressions of the animal characters”.

“Both works begin with young, uncool heroes who live in small towns with their parents. The heroes work to achieve a career dream that their parents specifically discourage. They go to academies where they excel, achieve recognition for their work, and earn the opportunity to go to the big city for their dream jobs.”

“In the big city, the heroes come up against strong, powerful and entrenched bosses who want to maintain control over the heroes".

Goldman continues to detail the similar narrative structures between the two Zootopias and says the “plot structure and these events involve and are driven by similar themes and characters, and they are used in similar ways to express similar themes”.
on 11:34:00 AM