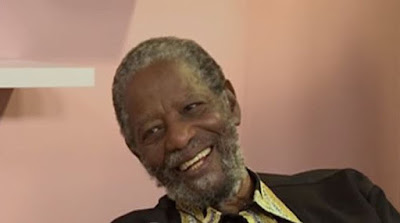 Veteran actors came out swinging good and nice on Thursday afternoon, slamming the SABC, the SABC2 soap Muvhango and South Africa's entertainment industry at actor Joe Mafela's memorial service, asking the public broadcaster to please start paying residuals and to do more than lip service when it comes to looking after actors.

The legendary Joe Mafela (75), most famous for his 'Sgudi 'Snaysi sitcom and Chicken Licken TV commerciasl work, died on Saturday night during a car crash on the M1 in Johannesburg, with a public memorial service that took place earlier today at the packed Johannesburg theatre and was broadcast on television.

Actors and friends didn't hold back, using their chance at the podium to voice not only their personal remembrances and honouring Joe Mafela's legacy but also speaking up and out about what he wanted to see happen within South Africa's entertainment talent sphere and resistant-to-change entertainment and television industry.

Actor Tony Kgoroge put the SABC on blast after SABC spokesperson Kaizer Kganyago spoke, saying that even though Joe Mafela himself didn't manage to fully escape exploitation in the local entertainment industry, that he is glad that he managed to rose above it.

Cautioning the entertainment industry, Tony Kgoroge said "the 'magic' is in the exploitation. They exploit you, they take your story, they own it, they pay for it, and then they say you'll just be a performer."

"Now coming into the new dispensation, the people like Joe Mafela tried to rise up and say to the broadcasters: 'We want to own our own. We want to tell our own stories the way we want to tell them, without anybody owning it or any foreign ideas becoming part of our narration".

"Then we're told because you don't have experience, go and partner with that company. And you go there - it's our white colleagues again. And when you go there you're only going there with a script or an idea," said Tony Kgoroge.

"They have cameras, they have editing suites, they have studios. They have everything you can think of. You're only bringing a script. How much of a percentage do you think you'll get from that? So you're bound to sell that story because you have to put bread on the table. You have kids that have to go to school."

Directly addressing the SABC, Tony Kgoroge said "Kaizer, was saying that they [SABC] is still repeating some of the things that Joe Mafela used to do. I hope and pray Kaizer that you pay our artists their royalties."


Cynthia Shange: It's not like we don't know how to save
Veteran actress Cynthia Shange who called Joe Mafela "my brother, then my father" used her turn at the podium to draw attention to the little job security and work stability local South African actors are provided, saying "I just briefly want to tell you about the life of actors".

"I've been in this field for 43 years. I know we make you happy. But deep inside most of us, we are not happy."

"We can just pretend to take those selfies, to sign autographs. Life for actors are very hard because we are not permanent. I'm 43 years in this industry but I'm still a freelancer."

"I must always sign a new contract. I've been with Muvhango for 18 years now. But each years we must sign a new contract. I can't get a loan because I'm not permanent.  You can maybe squeeze from your salary to have maybe a medical aid. But if you lose the job for that period, it lapses."


Rename SABC's Studio 5 the Joe Mafela Studio
Super-producer Mfundi Vundla of Generations The Legacy on SABC1 said that Studio 5 at the SABC's Henley Studios should be renamed after Joe Mafela.

"I said we have to do something to recognise Joe in a very signifcant way."

"Joe and I and Generations worked out of Studio 5 at the SABC, the biggest studio at Henley Studios. I wrote to the head of TV and said my suggestion is that this Studio 5 must be named The Joe Mafela Studio".

"In the big studio in Rome there where they make movies and stuff, Fellini had a studio where he worked all the time and after he passed, the funeral was in that studio and guess what, the studio was called the Fellini Studio. So Studio 5 must be called The Joe Mafela Studio," said Mfundi Vundla.

On Sunday veteran actress Lillian Dube revealed that the 11th South African Film and Television Awards (Saftas) that took place on Saturday at Sun City, organised by the National Film and Video Foundation (NFVF), didn't invite either herself or Joe Mafela to the award show although both of them are honorary recipients of lifetime achievement awards from the Saftas previously.
on 7:52:00 PM