2017 State of the Nation on SA television: The sound censorship, the 'F' you' sign language, the split screens and the red carpet coverage cringe. 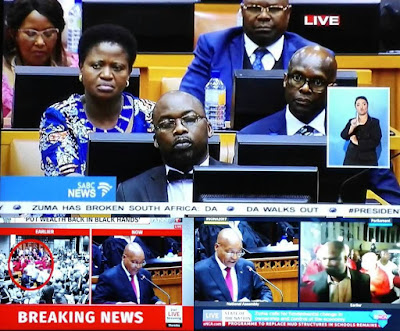 On Thursday evening South African viewers watched agape as the 2017 State of the Nation (SONA2017) once again devolved into shocking visuals inside parliament that included blatant sound censorship, a silent "F- you" from the sign language interpreter, the SABC's refusal to do split screens, and scorn for eNCA's bad red carpet cringe coverage.

Media was also herded by riot police outside parliament where a stand-off pursued and South African and world press were prevented from doing their jobs. 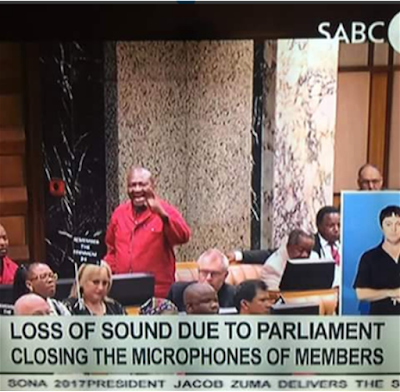 The sound censorship
After the signal jamming at the 2016 State of the Nation address to try and silence South Africa's press, the sound was blatantly censored during #SONA2017 for TV viewers once the horrifying fighting inside South Africa's parliament and teargassing of politicians and the public broke out and was seen worldwide on news channels like CNN International (DStv 401).

When the COPE political party's Willy Madisha spoke, all sound from the general assembly was cut off with viewers only getting silence on TV news channels like eNCA broadcasting the proceedings live.

It's not clear who censored and switched off the sound from parliament but it wasn't broadcasters.

eNCA online apologised for the sound censorship, saying it's not them and an issue beyond the channel's control.

Explaining the audio censorship, the SABC told viewers in an on-air bottom-third strip advisory that the "loss of sound [is] due to parliament closing the microphones of members". 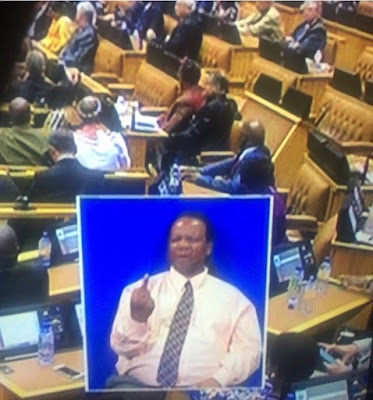 The silent 'F- you'
Meanwhile the stoic sign language interpreter was clearly not the fake hired for Nelson Mandela's memorial service.

The SABC gave viewers the full-on silent treatment when the sign language interpreter on Thursday night did a full-on "show and tell" of the filthy trash talk spewed inside the once stately general assembly when ANC members of parliament started shouting "F you" at the DA member of parliament John Steenhuisen.


The SABC's singular focus
Kudos to South Africa's trusted public broadcaster for not being distracted by Patricia de Lille being pepper-sprayed, women being assaulted by riot police, media being prevented from doing their work and the sideshow circus elsewhere in and outside of parliament.

While other broadcasters like eNCA (DStv 403) and ANN7 (DStv 405) went to split screen to show both president Jacob Zuma struggling through the reading of his State of the Nation Address, as well as shocking scenes in and around parliament, the SABC solidly kept its camera just focused on the president and his speech and some shots of sleepy politicians, unwavering in filtering out additional news noise.

Viewers only watching the SABC would get no sense whatsoever of what was happening simultaneously, the context of what is happening while president Jacob Zuma sneezed and laughed and read as if nothing happened.

Interestingly eNCA failed to issue any programming advisory or press release regarding its SONA2017 coverage plans, presenters, anchors and analysts as it did in previous years, and when asked earlier in the week in a media enquiry, failed to respond with details.

Highly awkward after awkward red carpet interaction ensued, with people saying that it's not Annika Larsen, who struggled to know and correctly identify politicians and others, but eNCA producers who should be carrying the blame.

It made for jaw-dropping viewing as Annika Larsen touched and basically "fashion interrogated" parliament's choir conductor for instance in an embarrassing and awkward interview, exposing him for not really wearing Louis Vuitton.

This red carpet coverage on @eNCA is too cringe. I can't handle it. I'm switching to US/Iranian relations on CNN. #SONA2017
— Carilee Osborne (@Caz_RSA) February 9, 2017

Dislike the way the ENCA reporter called the lady who is old enough to be her mother just to ask her to go & call Hellen Zille. No respect
— Mmabatho Moganedi (@MmabathoMogane4) February 9, 2017

@eNCA STOP your reporter from screaming at Premier's. Has she no Protocol at all!!
— Official PJ Powers (@PJPowers1) February 9, 2017