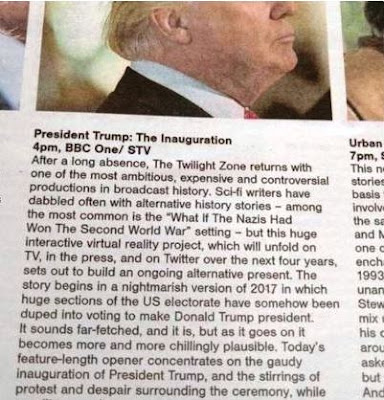 A TV critic's creative synopsis in the TV listings of an upcoming TV programme - the presidential inauguration of Donald Trump in America on Friday afternoon - is drawing global attention after he likened it to The Twilight Zone and a science fiction show set in "an ongoing alternative present".

TV critic Damien Love's TV listing in Scotland's Sunday Herald is now drawing attention around the world after he described the upcoming Trump inauguration and the next four years of his presidency, broadcast as a TV show, as "one of the most ambitious, expensive and controversial productions in broadcast history".


President Trump: The Inauguration
After a long absence, The Twilight Zone returns with one of the most ambitious, expensive and controversial productions in broadcast history. Sci-fi writers have dabbled often with alternative history stories - among the most common is the "What If The Nazis Had Won The Second World War" setting - but this huge interactive virtual reality project, which will unfold on TV, in the press, and on Twitter over the next four years, sets out to build an ongoing alternative present.
The story begins in a nightmarish version of 2017 in which huge sections of the US electorate have somehow been duped into voting to make Donald Trump president. It sounds far-fetched, and it is, but as it goes on it becomes more and more chillingly plausible. Today's feature-length opener concentrates on the gaudy inauguration of President Trump, and the stirrings of protest and despair surrounding the ceremony, while pundits speculate gravely on what lies ahead. It's a flawed piece, but a disturbing glimpse of the horrors we could stumble into, if we're not careful.


In 2017 viewers can watch brilliant shows with people trapped in alternative realities - ranging from The Man in the High Castle on Amazon Prime Video to Emerald City on Vuzu AMP (DStv 103), Travelers and Parallels on Netflix, 12 Monkeys, Timeless, Beyond and the upcoming Time After Time.

Yet it's the real world with Donald Trump as an American president and things like a looming Brexit, that millions of people worldwide find hard to believe and difficult to understand and adapt to.


Where to watch Donald Trump's inauguration
South African viewers can tune in for President Trump: The Inauguration in Washington, D.C. that will be broadcast on BBC World News (DStv 400 / StarSat 256) on Friday from 17:00 to 21:00, anchored by Huw Edwards and Sophie Raworth.

CNN International (DStv 401) didn't release any details or programming times regarding the inauguration and the channel's EPG on MultiChoice's DStv shows no special coverage but CNN will likely also carry it live from sometime on Friday.

Sky News (DStv 402) will switch to inauguration coverage from 17:00 on Friday.

CNBC Africa (DStv 410) will broadcast The Inauguration of Donald Trump on Friday from 18:00 to 22:00 switching to the American CNBC feed with coverage anchored by Carl Quintanilla, Michelle Caruso-Cabrera and Kelly Evans.