SABC News anchor Vabakshnee Chetty-Miller leaving the SABC after 15 years; moving to America; will say goodbye to viewers on Friday. 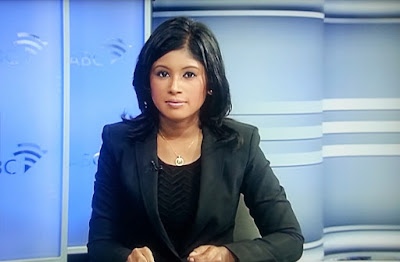 The well-liked SABC TV News anchor Vabakshnee Chetty-Miller is leaving the South African public broadcaster and will do her final sign-off and say goodbye to viewers on-air in her final broadcast on Friday evening on SABC News (DStv 404) and SABC3's TV news bulletin at 18:30.

There's been no statement from the SABC about her impending departure and replacement.

Vabakshnee Chetty-Miller, who recently returned from maternity leave after the birth of her first child to her chair behind the TV news anchor desk in Studio 9, is relocating to America with her husband.

She will likely be replaced by Francis Herd on the SABC's flagship nightly TV news bulletin who also sat in beside co-anchor Peter Ndoro during her colleague's maternity leave.

Vabakshnee Chetty-Miller, her American businessman husband Geoffrey Miller and the couple's 5-month old daughter daughter Ella Amalia Anne will move to Chicago in March but she will be doing her last TV news bulletin on Friday after 15 years as a journalist working for the SABC's radio and TV divisions.

As a broadcaster Vabakshnee Chetty-Miller, who've only ever worked at the SABC, had her wedding in late 2014 broadcast on SABC3's Top Billing.

As a professional news reader, she's endeared herself to viewers and listeners over the past decade and is beloved by SABC colleagues.

She kept her cool and remained professional - especially over the past three years - bringing viewers the news on television in the public broadcaster's flagship English TV news bulletin as it kept changing timeslots, suffered rating declines and while the SABC got battered and suffered a public backlash over Hlaudi Motsoeneng's SABC TV news censorship decisions.

She described her career at the SABC "as a fun one" ever since she started off as an intern in 2002 reading the news on Lotus FM and reporting, and then moving to Johannesburg.

Vabakshnee Chetty-Miller says she will "miss the warmth and the friendliness" of South Africans.

Due to the sudden move necessitated by her husband's changing job requirements, she hasn't been able yet to find a new job in America. "I have been thinking about it, but I haven't really made any plans. I'm going to give myself a few months to adjust."

"Chicago is extremely cold. It's cold for eight months of the year, and I've also just had a baby. So a lot of adjustment needs to take place and then I'll make the call after that".
on 11:31:00 AM