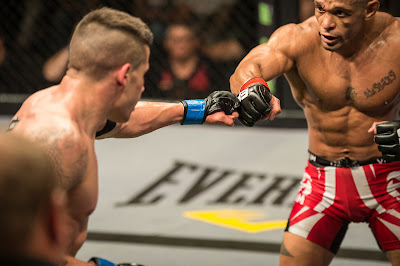 After the SABC failed to realise many of the promises the South African public broadcaster made for more live boxing on the SABC in June 2015 the SABC on Wednesday signed a multi-year broadcasting partnership with the Extreme Fighting Championship (EFC) to broadcast mixed martial arts (MMA) through the SABC Sport banner on SABC3.

EFC content was broadcast on e.tv in 2016 but this partnership is now switching to the SABC.

The announcement comes as the SABC struggles to provide enough and relevant sports coverage of national interest to South African viewers, with SABC executives the past two years warning parliament that the SABC will go bankrupt if it has to continue to fork out millions of rand for sports rights of which the costs keeps escalating.

Sully Motsweni, SABC Sport executive says in a statement he is "proud to announce that SABC Sport has partnered with EFC, a home-grown world-leading mixed martial arts organisation."

In the new deal between the SABC and the EFC, EFC fights will be broadcast on SABC3 from Saturday 11 February at 21:00 in two-hour blocks per week, with 10 live EFC event broadcasts per year.

The SABC says this EFC coverage will then be rebroadcast on Mondays at 14:00 on SABC3. This means the local Fun-Natix youth and kids programming usually broadcast at 14:00 on SABC3 is being replaced by fighting.

"This is a huge day for mixed martial arts and EFC fans across South Africa," says Cairo Howarth, EFC president.

"Now Saturday nights have got a whole lot more exciting thanks to SABC Sport. This is a huge milestone for EFC, its partners and the EFC athletes, who will all be showcased to millions of SABC3 viewers every Saturday night and repeated on Monday afternoon. Exciting times for MMA!"

SABC3 doesn't have million of viewers, with its most watched show in prime time during December 2016 luring 889 585 viewers.

"The SABC has always prided itself in producing and promoting the best home-grown television productions as well as bringing the best international sport and entertainment to local viewers," says SABC spokesperson Kaizer Kganyago.

"EFC events are hosted across South Africa, and appeal to a wide local audience. We are very proud to be promoting the sport in the different provinces and bringing all the top-quality EFC programming to SABC."
on 9:34:00 PM