M-Net's new content discovery show, The 101 will have the presenter troika of Donovan Goliath, Ebenhaezar Dibakwane and Virgil Prins. 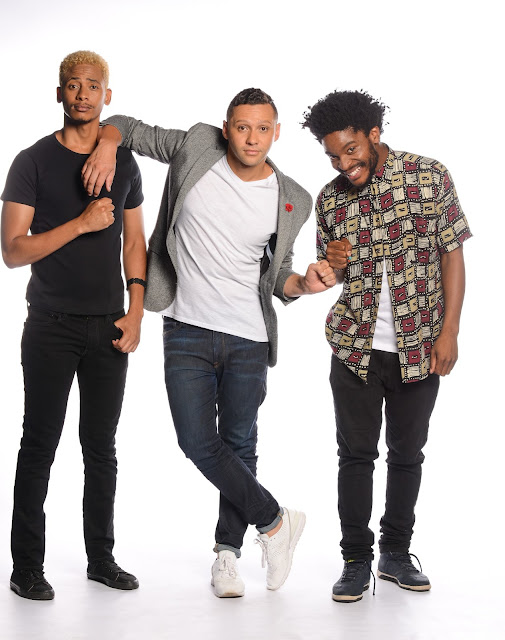 The comedians Donovan Goliath, Ebenhaezar Dibakwane and Virgil Prins will be the TV presenter troika of M-Net's new weekly content discovery show, The 101.

The 101 on the M-Net (DStv 101) channel will highlight programming across M-Net’s various channels on MultiChoice's DStv satellite pay-TV platform.

The show will guide viewers to help them find what's new, what's changing, possible programming pre-emptions and timeslot changes, returning seasons and also what new shows are about.

The weekly half-hour show will also help with practical DStv PVR and Explora decoder issues and tips, as well as mini educationals to help DStv subscribers use some of the powerful technology under their TV sets better to enable enhanced time-shifted and catch-up viewing.

The 101’s comedian presenters will do interviews with various famous faces, while informing viewers about M-Net's "Express from the US" titles, international production breaks in shows and why it happens, the very latest schedule changes, as well as do on-set visits to local shows that are broadcast across M-Net's range of channels on DStv.

The 101 was originally scheduled to start this Sunday on M-Net but has been pushed out by a few weeks due to production issues and some logistical challenges.

While The 101 will be broadcast on M-Net as a weekly linear show, M-Net is looking to make The 101 episodes as widely available as possible, including as non-subscription options and across as many digital platforms as possible to help TV viewers watch it – like for instance YouTube.

The main aim of The 101 is to help all TV viewers to be better informed about M-Net's programming and scheduling across the pay-TV broadcaster's large group of M-Net general entertainment and M-Net Movies channels on DStv.

M-Net is the biggest single provider of content to MultiChoice’s service in terms of self-compiled and packaged channels but a growing number of DStv subscribers – as is the trend with pay-TV viewers globally – struggle with the content discovery process and knowing where to find, and to watch, what.

When viewers know where and when to get and watch as well as record programming in their interest, the guided viewer behaviour helps to lift ratings.

Research regarding the powerful content suggestion algorithm functionality used by subscription video-on-demand (SVOD) services like Netflix and Naspers' ShowMax to show viewers similar type programming that they might also enjoy watching, based on their existing viewing preferences, have shown that people will actually watch even more television if they’re told about shows and films that are the same as what they already enjoy.

M-Net will make an official announcement about The 101 and its presenters soon.
on 9:03:00 PM