SABC2 soap 7de Laan forced to warn cast and crew that they might not get paid since,like Muvhango, the SABC has so far failed to sign a new contract. 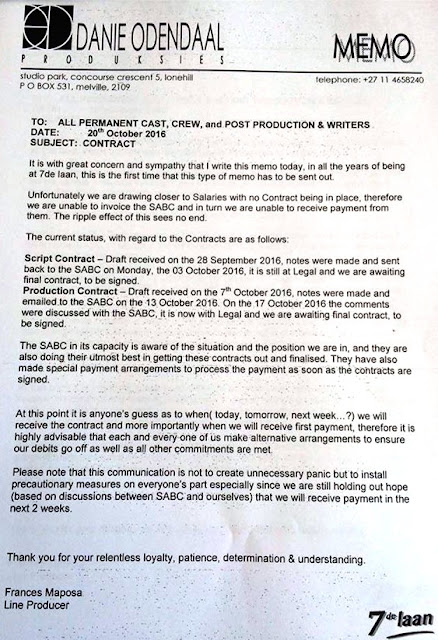 SABC2's 7de Laan production has been forced to warn its entire cast and crew to try and manage their finances since they might not be paid at the end of this month because the SABC continues to drag its feet in signing a new contract just like with Muvhango.


UPDATE Thursday 20 October 2016 14:00 - I'm told by production sources who confirm to me that the show will definitely not be giving the SABC any 7de Laan episodes unless there isn't a signed contract and that it means that if there is no signed contract, there won't be a 7de Laan episode on Monday on SABC2.

Like the SABC's other local soap on SABC2, Muvhango, that ran out of its current contract months ago and doesn't have a signed new one leading to financial hardship for the actors and crew who struggled to get paid, the SABC has so far also failed to sign a new contract with 7de Laan producers.

According to multiple insiders at Danie Odendaal Productions, the soap is in crisis with production that might shut down this coming Wednesday.

Frances Maposa, 7de Laan line producer wrote a memo to all 7de Laan staff - the cast, crew and writers - saying "it is with great concern" that 7de Laan is forced "for the first time that this type of memo has to be sent out".

YOU magazine reports that Frances Maposa told the cast and crew that the production company will withhold all episodes for the upcoming 18th season, set to start on Monday 24 October until the SABC has signed a new contract.

It means that if the SABC fails to sign an actual new contract, that there won't be new episodes on SABC2 from Monday.

According to insiders the SABC has been dragging its feet since August, and more than two months later 7de Laan is yet to see a signed contract.

SABC spokesperson Kaizer Kganyago says in response to a media enquiry asking why new contracts haven't been signed with Muvhango and 7de Laan, why there's been a delay, and how the SABC that says it supports local content and artists that the SABC doesn't pay staff of any production company and can't comment.

"The SABC does not discuss or negotiate contractual issues in the public domain or through the media," says Kaizer Kganyago.

The other SABC2 local soap, Muvhango, also doesn't have a new contract after month's of waiting. There the production company is paying actors and staff out of its own pocket, waiting for the SABC to sign a new contract as well.

Production on 7de Laan might shut down on Wednesday, according to sources, if cast and crew are not paid since several people use public transport to get to work.

In the memo Francis Maposa warns people about "the ripple effect of this sees no end" and that "each and every one of us make alternative arrangements to ensure our debits go off as well as other commitments are met".
on 12:45:00 PM