The South African comedian and host of Comedy Central's The Daily Show Trevor Noah has pulled out as host of the MTV Africa Music Awards 2016 set for Saturday night in Johannesburg as a live broadcast on MTV Base (DStv 322) and MTV (DStv 130) from the Ticketpro Dome at 21:00.

Not travelling to South Africa from New York over illness, Trevor Noah has been replaced by the South African presenter Bonang Matheba as the fill-on host for the pan-African awards show that will also be shown as a delayed-live broadcast on e.tv on Saturday night from 22:00.

It means that Bonang Matheba, a SABC presenter, will be seen on e.tv.

In a video message on social media, Trevor Noah says "Thank you to everyone that supports me, I know that a lot of you are going to be disappointed, I'm disappointed." 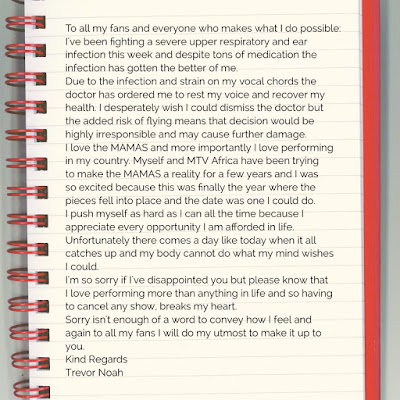 Before the video message, in a social media posting, Trevor Noah wrote that he's dropping out of his MAMAs 206 hosting duties "due to a severe upper respiratory and ear infection".

"Due to the infection and strain on my vocal chords the doctor has ordered me to rest my voice and recover my health. I desperately wish I could dismiss the doctor but the added risk of flying means that decision would be highly irresponsible and may cause further damage," wrote Trevor Noah.

"I love the MAMAs and more importantly I love performing in my country. Myself and MTV Africa have been trying to make the MAMAs a reality for a few years and I was so excited because this was finally the year where the pieces fell into place and the date was one I could do."

"I push myself as hard as I can all the time because I appreciate every opportunity I am afforded in life. Unfortunately there comes a day like today when it all catches up and my body cannot do what my mind wishes I could."

"I'm so sorry if I've disappointed you but please know that I love performing more than anything in life and so having to cancel any show, breaks my heart. Sorry isn't enough of a word to convey how I feel and again to all my fans I will do my utmost to make it up to you."

MTV Africa Music Awards 2016 organisers called Bonang Matheba on Thursday night at 20:30 and asked her is she could fill in as replacement host for Trevor Noah with 24 hours to prepare.

"We are thrilled that Bonang Matheba, one of Africa's most inspiring and luminous media personalities, will be hosting the MTV Africa Music Awards on 22 October," says Alex Okosi, the senior vice president and managing director at Viacom International Media Networks Africa (VIMN Africa) in a statement.

"With her extensive presenting experience, personal charm and beauty, Bonang Matheba is going to make a fabulous host for the MAMAs 2016 and we look forward to an amazing show on 22 October with her at the helm."

"We are naturally disappointed that Trevor NOah will be unable to join us on Saturday, but his health is of paramount importance and we wish him a speedy recovery," says Alex Okosi.
on 8:10:00 AM