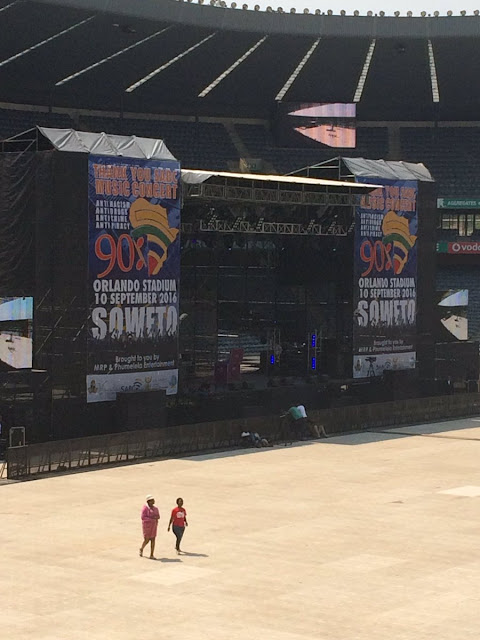 The shockingly bad and barely publicised Thank You SABC Concert that took place on Saturday quickly turned into a monumental flop and yet another shameful embarrassment for the SABC despite promises of free T-shirts and gifts.

The Thank You SABC Music Concert that was promised to "fill up the stadium and fill up the stomachs of the artists" started hours late with no explanation and quickly went from very bad to worse, taking the SABC's image with it.

With a totally abandoned line-up, some invited artists like Jack Parow were barred from performing, waited hours and left and several promised headline artists completely ditched the hastily arranged and totally botched event where even the promised SABC Choir of Hlaudi Motsoeneng was a total no-show.

Meanwhile images of the basically empty Orlando Stadium on Saturday for the Thank You SABC Concert that was supposed to take place from 10:00 to 22:00, showed what an expensive and utter flop it turned out to be, while SABC executives, SABC News and organisers valiantly tried to spin the news and concert into success.

Industry insiders expressed shock in the week when the SABC suddenly announced the Thank You SABC Concert on Tuesday - a promised massive event that usually takes months of preparation and planning. 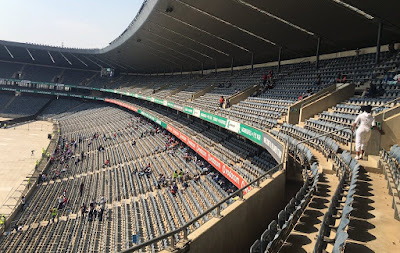 While the SABC in an original statement confirmed that it is paying for the expensive Thank You SABC Concert, it suddenly backtracked saying the controversial Morris Roda Productions company is responsible for the concert, while artists started saying they were not paid.

Confusion spread with very little publicity of the concert to the public and the event quickly turned into a massive organisational quagmire in the days leading up to Saturday and the resulting flop, embarrassing the SABC and damaging its already battered brand.

The Thank You SABC Concert organised by Mzwake Mbuli was supposed to have 100 South African musicians "from all genres" performing at Orlando Stadium - but it was anything but. Not only were there not 100 artists, the music was definitely not from all genres.

In the week artists slammed the SABC and organisers on SABC television during a live broadcast before they were shut down, saying "the doors are closed to us" at the SABC and wanting to know why young artists are allegedly not given exposure at the Thank You SABC Concert.

Starting more than two and a half hours late, artists like the Soweto String Quartet on Saturday afternoon performed at the Thank You SABC Concert to a virtually empty Orlando Stadium normally seating 40 000 people.

Even the SABC Choir - promised on the programme line-up which was completely useless and not followed - was a total no-show.

Meanwhile the SABC's SABC News division reporting on the event, kept to close-up angles and cropped shots on Saturday afternoon, trying to make the empty stadium look full while in reality there was no crowd.

That didn't stop some stragglers from telling the SABC during a live interview on SABC News (DStv 404) that the concert is badly organised and that the artists and organisers "have a problem with time-management". 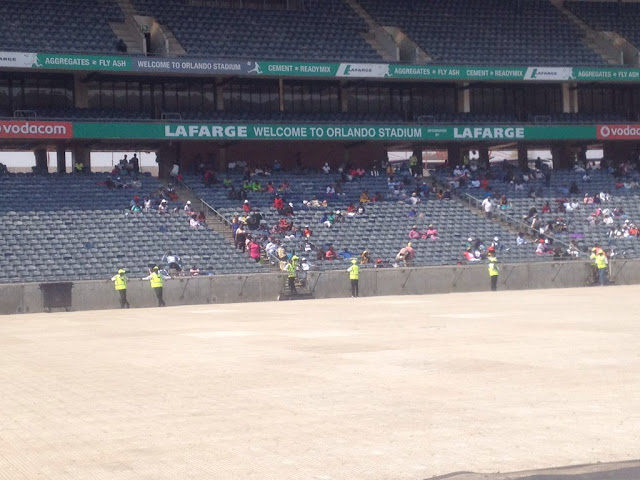 SABC News reporter Mahlako Komane who failed to report the real news, tried to spin the news during cross-overs, and failed to hold SABC executives and organisers accountable by throwing soft questions instead of asking why the concert started hours late, why the Orlando Stadium is empty, why it was badly publicised and organised and where the promised artists are.


In a highly embarrassing interview in the almost empty stadium, the SABC executive Bessie Tugwana who was recently moved to head of the SABC's corporate affairs division, said "today the whole country is standing still, paying tribute to SABC".

"We are humbled by the gratitude and the entire SABC is here to witness this groundbreaking gratitude". 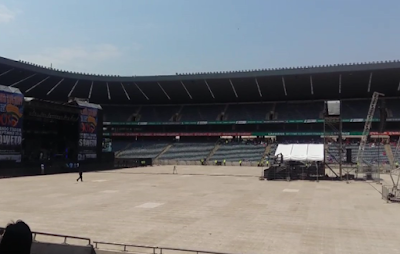 In the week Mzwake Mbuli said the concert is going to break records - so much so that it should be entered as a Guiness World Record. The concert still might - but not for the record he's thinking of.

"What we are doing must go to the Guinness Book of Records," said Mzwakhe Mbuli.

On Saturday night the SABC's controversial chief operating officer (COO) Hlaudi Motsoeneng, the minister of communications Faith Muthambi, and the SABC chairperson Obert Maguvhe attended a part of the event.

Later Obert Maguvhe said "We want to give an assurance to you that local content is here to stay. We want to ensure that talent is unearthed, talent is developed, talent is promoted and talent is nurtured."

By 14:02 on Saturday - although the concert was billed to start at 10:00 - the SABC reported using future tense that "people are trickling into the Orlando stadium in Soweto where the much-anticipated SABC Thank You music concert will take place".

The massive failure of the Thank You SABC Music Concert was slammed by political parties, commentators and artists, while on social media people were having a field day at the SABC's expense.

Musician Jack Parow whose real name is Zander Tyler and who was asked to perform slammed the SABC, saying he couldn't perform and left "after more than an hour of trying" to get on stage.

"No one knew what was going on and made us feel so uncomfortable and unwelcome, and basically like we shouldn't be there. We came all the way and trusted your word after everyone else pulled out, and you begged us to still come," said Jack Parow.