Baba loves him so much, but not even the SABC knows what to call Hlaudi Motsoeneng anymore, telling viewers his 'current employment status is uncertain'. 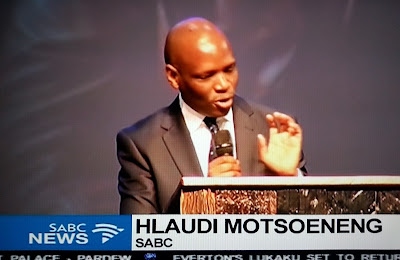 While the SABC has dramatically ramped up glowing coverage of its controversial and embattled [insert job title here] Hlaudi Motsoeneng through its SABC News division since June, Friday evening presented a particular problem, since not even the SABC knows anymore how to refer to its caustic dear leader.

Unable and unwilling to pass on an opportunity to once again thrust the latest Hlaudi Motsoeneng public speaking podium speech on-screen for its audience, it presented a problem the SABC never quite encountered before - what to call him when it gives him fawning exposure.

SABC news staff on Friday were ordered to go big with Hlaudi Motsoeneng's latest off-topic speech at Mandoza's funeral, but the SABC itself no longer knows what to name and call him.

It made it even more confusing - and from an academic and media studies point of view even more interesting when examining it from a news values perspective.

The SABC was and is willing to put someone on air and give a very selective outtake from that person's utterances exposure as news reporting during its TV news bulletin.

Yet the SABC is unable to say or itself explain why legitimately it is doing so. Why give exposure within news reporting to someone who you don't know, and admit you can't confirm, what role and position he speaks from?

On Friday evening in its flagship TV news bulletin in English and in other broadcasts on SABC3, SABC News and the SABC's other channels, the SABC had no idea itself what Hlaudi Motsoeneng now is.

It comes after the Supreme Court of Appeal on Monday ruled that Hlaudi Motsoeneng's appointment as permanent chief operating officer (COO) at the SABC is invalid.

On screen on Friday evening the SABC and SABC news staff didn't know what to put in the lower third banner under Hlaudi Motsoeneng's name where SABC News must identify someone to viewers.

The SABC only typed "SABC".

SABC board members are now trying to appoint Hlaudi Motsoeneng as "acting COO" through a back-door proposal that already led to a new barrage of criticism and a new round of legal action.
on 5:53:00 PM