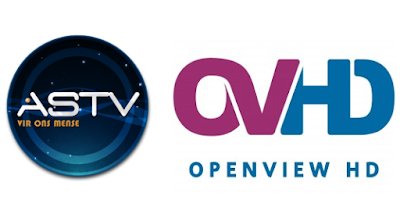 OpenView HD has dumped ASTV, with the Afrikaans TV channel that didn't meet its content and performance criteria that will go dark on 14 October on the OpenView HD platform just three years after it was added in October 2013.

ASTV's culling from Platco Digital's OpenView HD is however a big set-back and an embarrassment - especially since it was actually acquired by Sabido Investments (now eMedia Investments) in mid-2014 with big fanfare and the news launched with a media event.

While the former CEO of e.tv, Marcel Golding saw potential in ASTV, ASTV says the channel's contract was ended with eMedia early in 2015.

The contract was ended just a few months after Mark Rosin and Antonio Lee took over following the ugly and acrimonious corporate ousting of Marcel Golding and his wife, Bronwyn Keene-Young as COO.

ASTV's channel head, Jaco Ferreira, in a statement, says despite "talks of a new Afrikaans TV channel with which ASTV would have merged, nothing came of it after months of meetings".

"Due to unsuccessful negotiations, ASTV was sold back to the original shareholders during November 2015. ASTV was however still given the opportunity to continue broadcasting on the OVHD platform".

ASTV was told on 2 August that the channel is getting dumped from OpenView HD.

ASTV says that after a meeting on 10 August with OpenView HD's group channel and acquisitions executive, Ziyanda Mngomezulu, ASTV still tried in vain to persuade OpenView HD to keep ASTV on the platform, but according to ASTV, OpenView HD kept to its decision to kick the channel off.

"ASTV has always had a great relationship with OpenView HD, Platco Digital and e.tv. It was especially the case during the time when Marcel Golding was still involved," says ASTV in its statement.

"Unfortunately OpenView HD no longer sees a place for ASTV on their decoder," says ASTV, adding that "during the time of carriage on OpenView HD, ASTV advertised the company [OpenView] and lured thousands of customers to the platform".

"These days there is however an obstacle from OpenView HD's side in terms of the availability of decoder stock in stores," says ASTV.

"Currently disheartened customers must return home empty handed since there's not enough stock available. It's therefore with big regret that we have to end our broadcast on OpenView HD from 14 October because of the aforementioned reasons," says ASTV.

ASTV says it will remain available on OpenView HD competitor StarSat, and that a big benefit is that "there's exists no costs to broadcast on StarSat".

"StarSat is also willing to make the necessary investments in ASTV that will ensure more better quality entertainment".

In response to a media enquiry, Ziyanda Mngomezulu of OpenView HD confirms to TVwithThinus that "ASTV will be coming off OpenView HD. The channel did not meet our content and performance criteria. OpenView is continually looking at refreshing its channel offering".
on 3:34:00 PM