'BYE, BYE': John McLaughlin, moderator of 'the American original', The McLaughlin Group, dies at 89 from cancer; now with his dog, Oliver, in heaven. 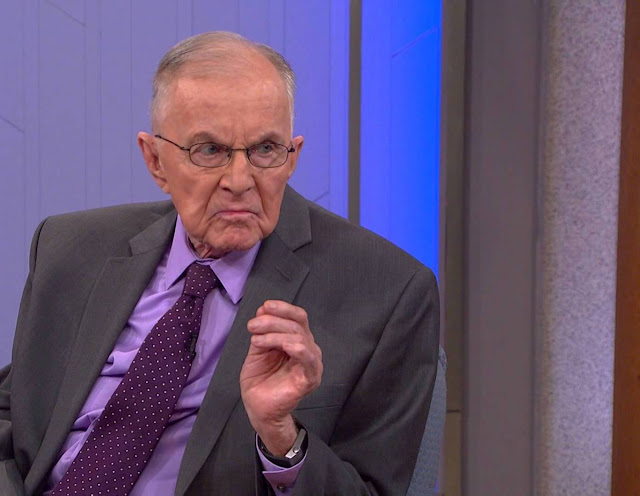 John McLaughlin, the moderator of the weekly The McLaughlin Group has died.

He was 89 and died in his home in Virginia in hospice care after prostrate cancer that was diagnosed a while ago and that had spread.

After a repeat episode the previous week, this past week was the first time in 34 years of hosting the fast-paced weekly political panel show that John McLaughin wasn't in the centre blue chair as moderator, although such was the dedication of the panelists Clarence Page, Pat Buchanan, Tom Rogan and Eleanor Clift, that they did the episode without him.

"Earlier this morning, a beloved friend and mentor, Dr. John McLaughlin, passed away peacefully at the age of 89," said the McLaughlin family in a statement on Tuesday.

"As a former jesuit priest, teacher, pundit and news host, John touched many lives. For 34 years, The McLaughlin Group informed millions of Americans. Now he has said bye bye for the last time, to rejoin his beloved dog, Oliver, in heaven. He will always be remembered." 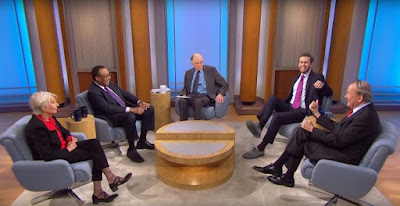 John McLaughlin was the creator, executive producer and moderator of "the American original", The McLaughlin Group that started in 1982 and was seen around the world, including South Africa on channels like CNBC Africa (DStv 410) for a number of years, after which full weekly episodes were immediately uploaded every Saturday to YouTube.

John McLaughlin was known for the academic-like quality, topics and grilling questions he asked his panelists, his "Bye, bye" and sign-off handwave at the end of every every episode, his often unexpected "forced predictions" and his "On a scale of zero to 10, where 0 means zero probability and 10 means metaphysical certitude...".

This past week John McLaughlin missed his first episode in 34 years.

The episode started with a note, telling viewers: "Dear friends of The McLaughlin Group, Dr. McLaughlin here. As the panel’s recent absences attest, I am under the weather. The final issue of this episode has my voice, but please forgive me for its weaker than usual quality. Yet my spirit is strong and my dedication to this show remains absolute!" 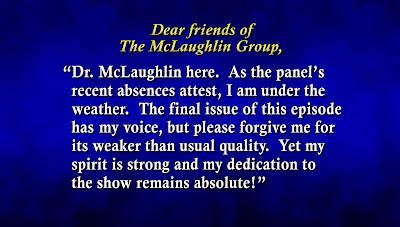 Although sounding incredibly frail and of course ill, John McLaughlin still recorded the voice-overs for all of the "issues" in the last episode for the panelists to discuss and argue over.

Following his death, on Twitter, The McLaughlin Group said: "John is with Oliver" a reference to his beloved basset hound who passed away years ago and can always be seen at the end of every episode's end credits as part of Oliver Productions.

He mentioned Oliver again in one of his two-part, annual "Year End" specials two years ago, saying: "Person of the year: Pope Francis, especially now that he's told that animals can go to heaven. And Oliver is up there waiting for me."

An emotional Tom Rogan - who often, gently, acted as almost a second moderator helping a sometimes forgetful John McLaughlin along with prompts and who book-ended the last episode with a goodwill message to John McLaughlin ("On behalf of the panel we all want to say to John, we're thinking of you and you have our very best" - shared a message on Tuesday about John McLauglin who he called on his website my close friend and defining mentor.

Panelist Eleanor Clift, for years from Newsweek and then The Daily Beast, wrote a fitting and must-read goodbye, saying "We will miss his signature phrases, beginning with Issue One, and ending with Bye-Bye. And we will miss the man". 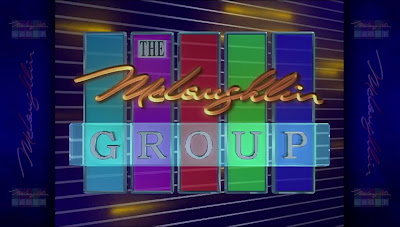 Editor: The first time I watched John McLaughlin - and I still have it on several old VHS cassettes - was as moderator of the special Cheers 200th episode that was broadcast on the then CCTV channel.

He was, and spoke like the university professor I wish I had but never did during all my years of tertiary education.

Prefacing every discussion with "issue one", "issue two" he would lay out the subjects with background and then challenge the panelists with difficult questions, trying to catch them out, but probably being proud when they managed to hold their arguments, fight back and come up with "right" answers.

Every since The McLaughlin Group was broadcast in South Africa I've watched it, and I never ever, and mean, never, missed an episode over the past 9 years - first on television, and then later on YouTube where I would religiously download every episode in high definition and watch it very late very Sunday night.

It was packed with humour. The McLaughlin Group was parodied over the years, it popped up in popular culture like the film Watchmen, and also did something for the current film, Independence Day: Resurgence, for instance:

What made The McLaughlin Group different from all other modern-day political shouting heads is that they shouted and argued, but that you could see they were actually friends and had respect for one another, despite their political and ideological differences.

I was amazed, and remained amazed every single week, over the daunting and endless sacrifice in terms of sheer time, dedication and effort John McLaughlin and the panelists have put in over years doing this show, and reaching across the world, including someone like me, a South African TV critic, who appreciated it enormously for what it was.

In March this year I told of how The McLaughlin Group is on my list of guilty TV pleasures - among the countless hours of television I (have to) watch every day and week and month, a bit of the rare television that I honestly enjoyed watching incredibly much.

The McLaughlin Group was the most cerebral singular half hour of television I indulged in weekly.

I will miss John McLaughlin's esoteric comments, the bickering panelists making their cases and the entire show for what it was immensely.